A Pavement with Aspiration


[Any of the images can be clicked to enlarge.]

HITRANS is one of seven Regional Transport Partnerships in Scotland
which were established through the 2005 Transport (Scotland) Act. 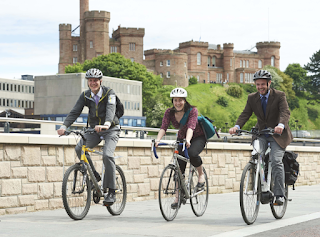 It included a publicity picture of three commuter cyclists.

The chosen location was the newly opened Huntly Street with Inverness Castle in the background and the River Ness out of sight on the other side of the flood wall.


A few days later, the Press and Journal ran an inspiring story based on the Press Release.
Cycle friendly Inverness tops cycle to work poll

Their caption for the picture referred to "... the new cycle friendly lane on Huntly Street ..."
My immediate thought was "If it's so cycle friendly, why are they all wearing helmets?"
I know that each of these has their own reason but it's just not that typical of local cyclists.

But a "new cycle friendly lane" is always worth taking a looking at. 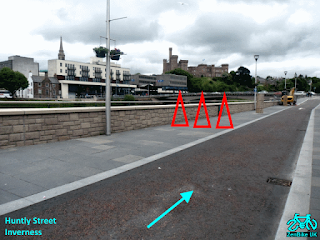 This photo is a zoomed-out view at the same location.

The triangles represent the approximate position of the cyclists on an unsegregated shared-use pavement with a Caithness slate surface.

The tarred road is one-way in the direction of view. There is a narrower path on the side where I was standing.

In the distance, a yellow digger is completing some final work on the wall.


Huntly Street is a Restricted Parking Zone. Although there are no single or double yellow lines, parking should only be in designated bays. The pavement, as shown here, has a dropped kerb flush with the roadway and is not designated for loading or parking.


I took my photo in late morning and was lucky to catch a moment when the pavement was clear.
Usually there are cars on the riverside pavement. And they're not just partly on the pavement but in the middle of the pavement. 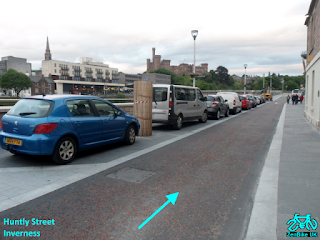 This next photo was taken later in the day and a bit further back.

A shot like this with 9 parked vehicles is much easier to take.

Notice that the pedestrians are on the narrower pavement. 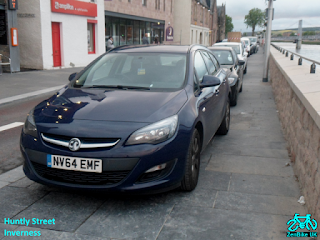 This is not surprising really when you see the view looking back from roughly where the cyclists were pictured.

The question whether this pavement is "cycle friendly" is currently irrelevant.

Sadly, this pavement is not even pedestrian friendly.


Some motorists believe pavement parking is allowed because of the lack of yellow lines.
The pavement being at the same level as the road encourages this idea.
Once one driver parks, others are quick to follow.

What can be done to return the pavement to its intended use?

- Traffic Wardens could advise drivers who attempt to park.
But this would be a full-time job and (as far as I know) the Highlands only has two Traffic Wardens.

- Fix 'No Waiting - At any time' plates to appropriate lamp standards. It is accepted that there is a desire to reduce street sign clutter. But drivers have been observed looking at lamp standards to see if there are any parking restrictions. This would provide a reference for the avoidance of dispute.

- Place temporary traffic barriers along the kerb. They don't need to be joined together. Just enough to indicate that this is a pavement and is not intended for vehicles. Temporary fencing has been put in place near Friars Bridge to protect the new grass. Surely people are no less important than grass.

First we need to be able to use the pavement - then we can consider how friendly it is.

Your comments are welcome.
Posted by Zen Biker Maniac at 03:17