A Trip down King Street 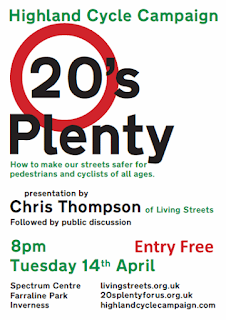 The subject of 20's Plenty was inspired by a recent earlier meeting with Rod King MBE.

As I would be doing an introduction, I decided to familiarise myself with some of the 20 mph streets around Inverness. 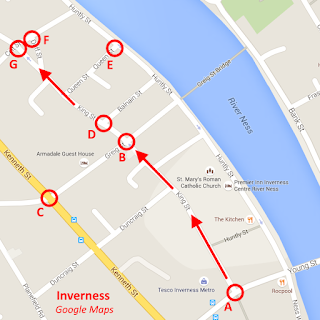 There are significant examples of good practice in Inverness but I found one area particularly confusing.

The route of interest starts at Junction A. 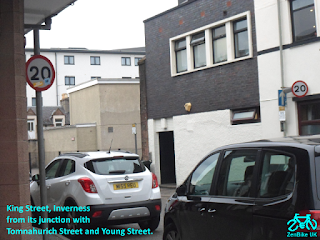 King Street is one-way with its speed limit clearly signed as 20 mph from the junction.

Let's proceed along King Street to the next main crossroad. 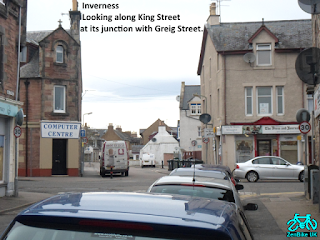 This is the junction of King Street with Greig Street.

This would seem to imply that Greig Street, the street we're crossing must be 30 mph. 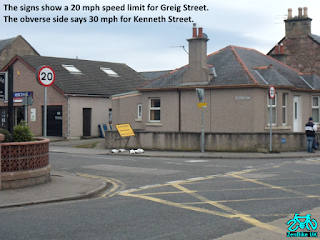 But if we take a short detour to the Kenneth Street end of Greig Street we can see that Greig Street is actually signed (correctly) as 20 mph.

So the 30 mph signs at Junction B are wrong. 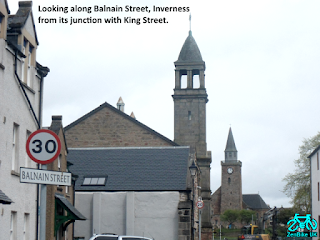 Continuing a little further along King Street, we come to the junction with Balnain Street. 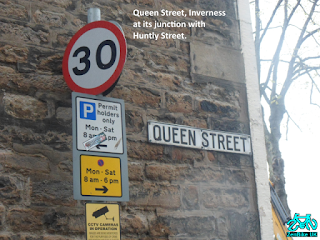 Next we come to Queen Street which is 20 mph and has 20 mph signs just before it meets Huntly Street.

Huntly Street runs along the west bank of the River Ness and is currently closed for the Flood Alleviation Scheme. 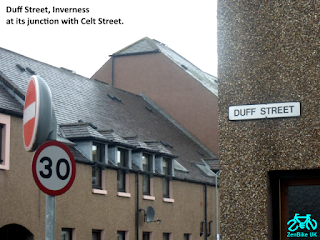 At its far end, King Street forks into two streets that both make a junction with Celt Street.

The street on the right, Duff Street, has a pair of 30 mph signs just before Celt Street. 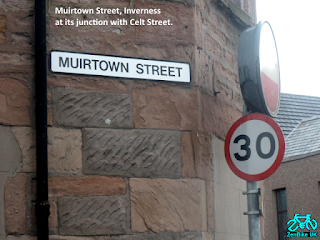 The street on the left branch, Muirtown Street, similarly has a pair 30 mph signs where it crosses Celt Street.

So the 30 mph signs at Junctions F and G must be wrong.

It seems clear that there are five pairs of 30 mph signs in this area that make no sense and are wrong.

I queried this with Highland Council. The response didn't really anser my question but there was some speculation that it had to do with the Flood Alleviation Scheme. I got no response from FAS at all.

Some people I've spoken to suggest that the signs will be checked and corrected if necessary at the completion of the Flood Alleviation Scheme in this area. I can see no reason to delay the removal of these 30 mph signs.

I appreciate that the current law makes it awkward and costly to create 20 mph zones.
The Highland Council have achieved many good results in difficult circumstances.
But inconsistent signage can cause drivers to lose track of the applicable speed limit.


I informed the relevant Councillors of the original blog and got positive responses.
I didn't hear any more about it so I checked again on Sunday 31 May and was pleased to see that all the offending 30 mph signs had been removed. There are now also additional 20 mph signs. 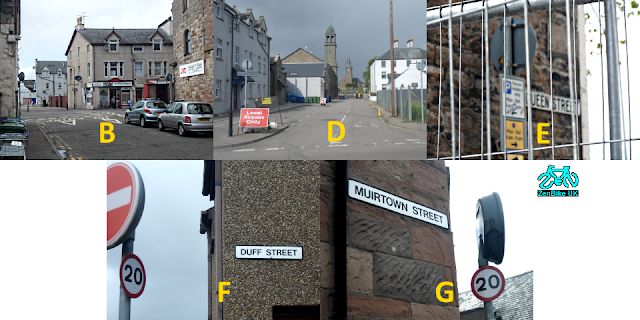 I don't know if the original blog had any effect. The removal may have already been planned.
However the final result is most welcome. A large area is now 20 mph throughout.
All signs are mandatory (not just advisory 20's plenty or time dependent).
This is particularly good because the area contains two primary schools.

Posted by Zen Biker Maniac at 02:34 No comments: 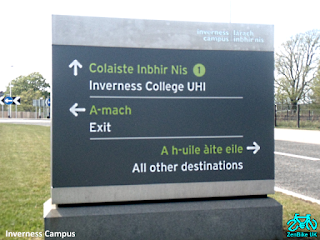 This weekend saw the official opening of the Inverness Campus by John Swinney MSP.

All the signs are in Gaelic and English. If you say 'Inner Neesh' you'll be more fluent than most of the people in Inbhir Nis (Inverness). 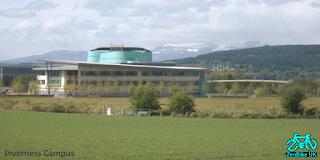 The dominant building on the campus currently is Inverness College UHI.
Behind it can be seen the Kessock Bridge.
And about 26 miles away Ben Wyvis. 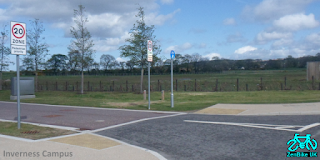 The whole campus has a 20 mph speed limit.
The sign here is also qualified with PEDESTRIAN PRIORITY.
It does seem a bit odd that the crossing point is just outside the pedestrian priority zone. 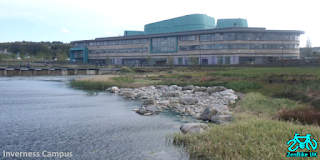 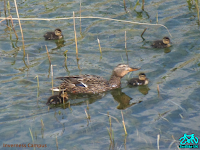 Many natural land features have been created.
The most obvious is a loch with viewing points at several easy-access positions around its edge.
Already, the loch is hosting a variety of wild life. 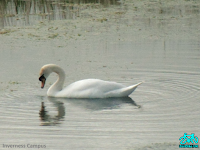 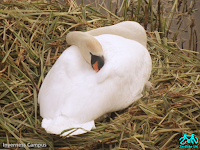 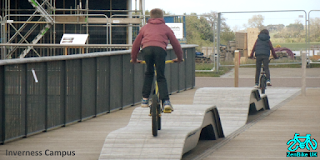 There were many visitors this weekend: walkers, cyclists and some just driving around slowly. All were impressed with this new amenity. A group of young cyclists were enjoying tackling various wood and stone obstacles. 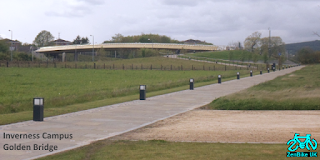 At a far corner of the campus, the Golden Bridge provides a crossing over the A9 to Raigmore Estate for pedestrians and cyclists. 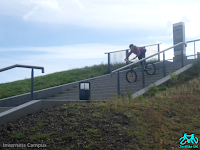 The path to the bridge follows a moderate slope for cyclists.
There is an alternative set of steps for those that prefer it.
It seems to attract Danny MacAskill fans. 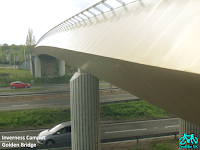 The Golden Bridge spans the dual carriageway as well as the on and off ramps, a total of eight lanes.

The side barriers are angled (presumably to discourage people dropping things onto passing vehicles). This makes it quite awkward to look over the edge from the bridge.

Preventive measures can offer unintended opportunities.
At several places, I noticed circular arcs on the stainless steel.
These seemed to be consistent with 'Wall of Death' cycling 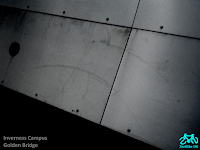 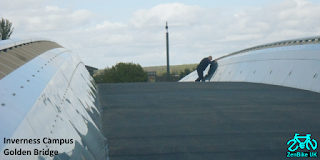 The ramp at the far end of the bridge has right angled corners including one 180 degree turn.
The signage from the end of the bridge into Raigmore Estate has been in position for over a year.
A focus of comment from the start was an unwanted CYCLIST DISMOUNT sign.
This has now been removed at last. Obviously this does nothing to improve the design. 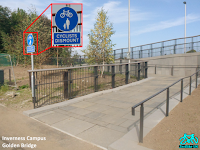 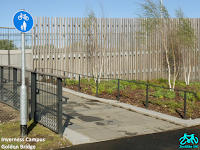