A Review of the Scottish Bike Counters


Introduction
Last year a bike counter was installed on Millburn Road in Inverness.
It is one of nine bike counters sited around Scotland.
As well as the current date, time and temperature each counter displays the number of bikes that have passed the counter that day since midnight along with the total since the start of the year.
There are also a pair of master counters at Victoria Quay, Edinburgh. They don't themselves do any counting but simply display the values from the other nine.


Online Sources
Clickable photos of most of the Scottish counters (and one in Cardiff) can be seen online at
http://www.falco.co.uk/products/live-cycle-counter-data/

The location of 52 bike counters around  northern Europe can be seen on a map at
http://www.bicyclecounter.dk/BicycleCounter/BC_cykelbarometer.jsp
Individual counters can be selected and displayed from the side bar.
Then, clicking 'See statistics' shows two graphs
- hourly data over the previous 24 to 48 hours;
- daily data for the previous fortnight.


My Interest
I was curious to see how the Millburn Road counter could be used to support local cycle campaigning.
Although the operation of the physical counter looked good, I soon noticed problems with the online graphs.
I then noticed problems in the other Scottish counters.
I haven't spent much time looking at counters in other countries but haven't observed any issues.

To give a fair assessment, I monitored the Scottish online graphs from the beginning of February.
I visited Edinburgh on Sat 21 Feb to attend the Campaigner Training Day.
When I got home, I discovered that four of the online counters had stopped.
February may have been an unfortunate month but, at any time, only the previous month is available online.

The graphs shown here were created by Olsen Engineering for the ITSTeknik website.
Click on any graph to enlarge it. 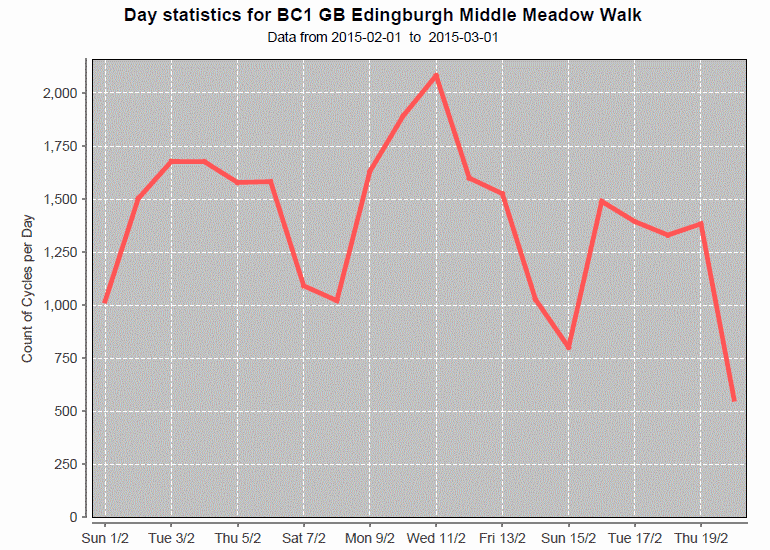 The daily count for Wed 11 seems rather high compared to the typical count of about 1500.

The consistently lower weekend counts point to people cycling to get to work rather than for leisure. 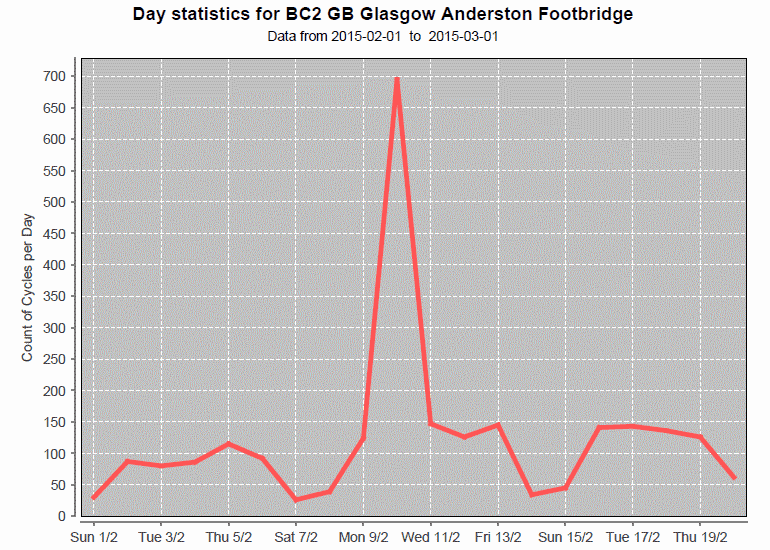 The typical daily counts of around 100 to 150 are dwarfed by the obviously anomalous count of 700 for Tue 11.

The consistently lower weekend counts point to people cycling to get to work rather than for leisure. 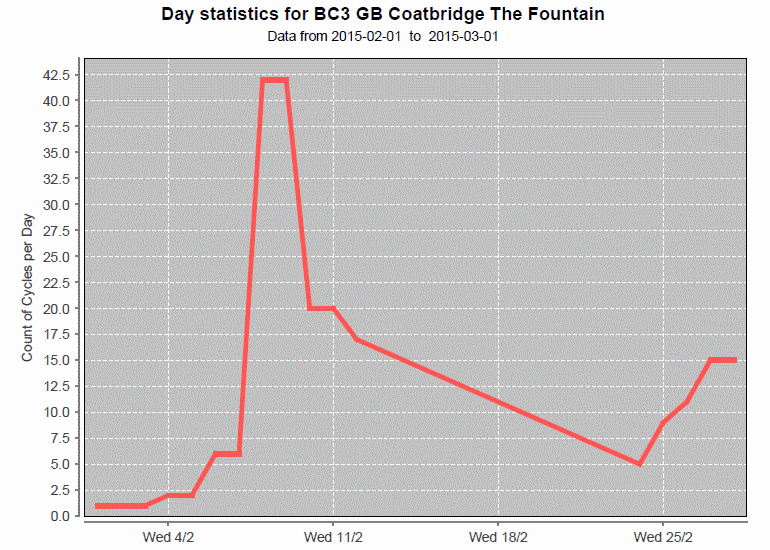 BC3 Coatbridge The Fountain

The graph appears continuous for the whole month. But two parts are suspect.

The peak for Sun 08 / Mon 09 is unusually high and the same for both days.

The ramp down from Thu 12 to Tue 24 is too steady to be believed. Interpolated? 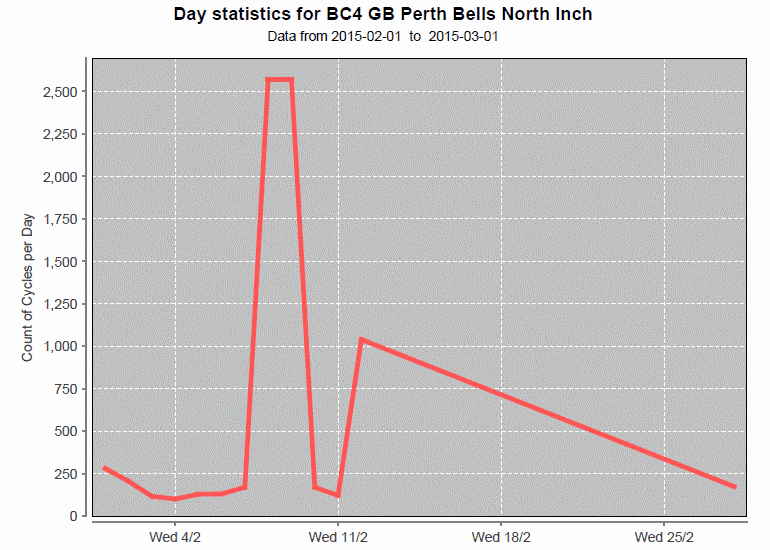 The graph appears continuous for the whole month. But is surprisingly similar in profile to BC3.

The peak for Sun 08 / Mon 09 is unusually high and the same for both days.

The ramp down from Thu 12 to Sat 28 is too steady to be believed. Interpolated? 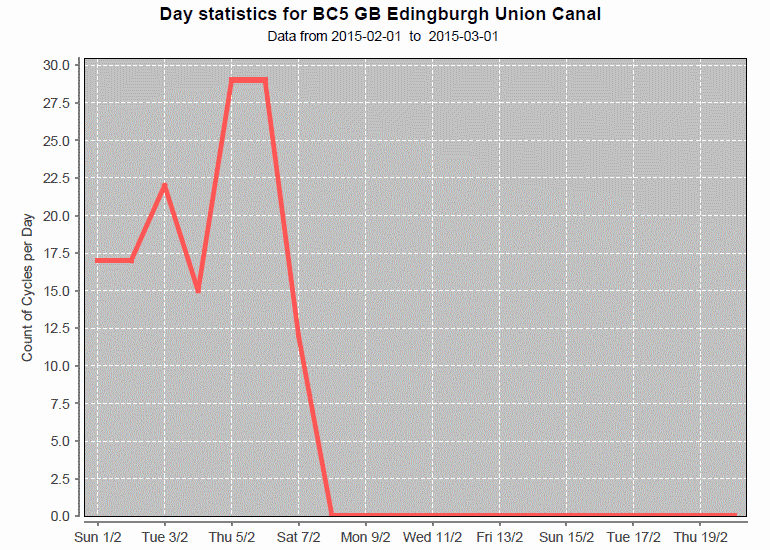 This counter normally gets little traffic and appears to have stopped recording after Sat 07.

The counts for Thu 05 and Fri 06 being unusually high and the same is suspect. 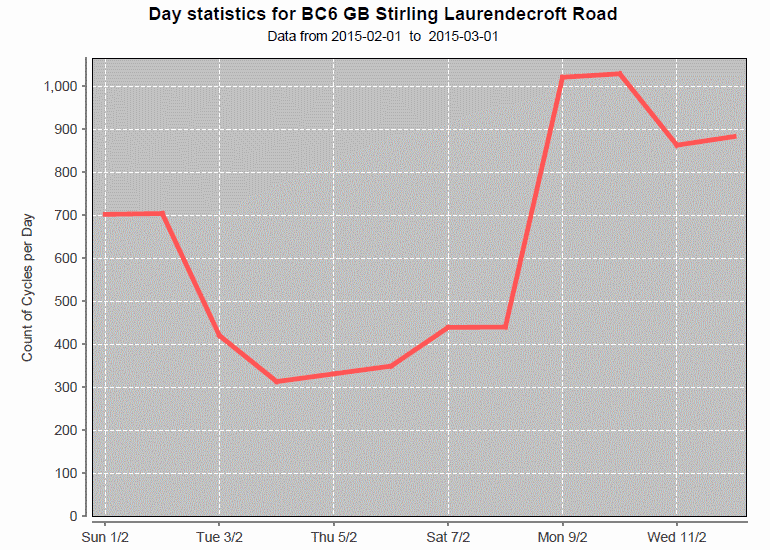 BC6 Stirling Laurendecroft Road (sic)
(Should be Laurence Croft Road)

The variation between 300 and 1000 seems rather large.
These may be correct but not much can be said with so few values. 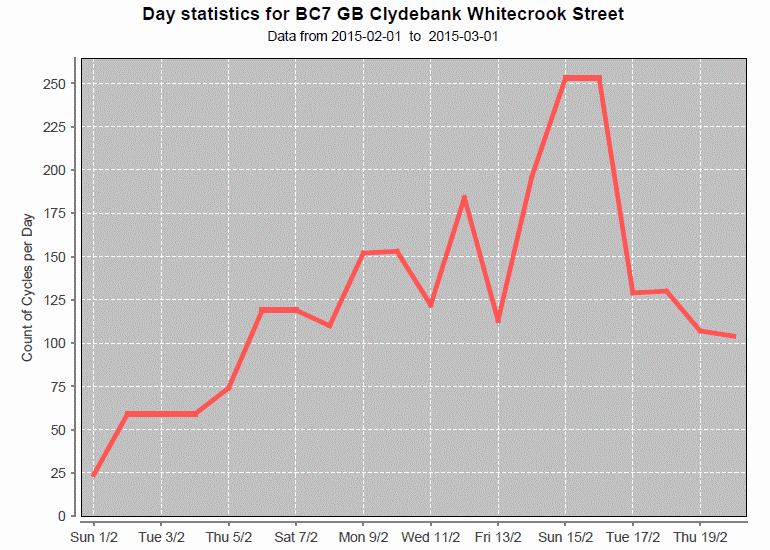 The graph shows a ten-fold increase over 15 days followed by a dramatic halving in one day.
It would be interesting to know if this corresponds with reality and what the explanation is. 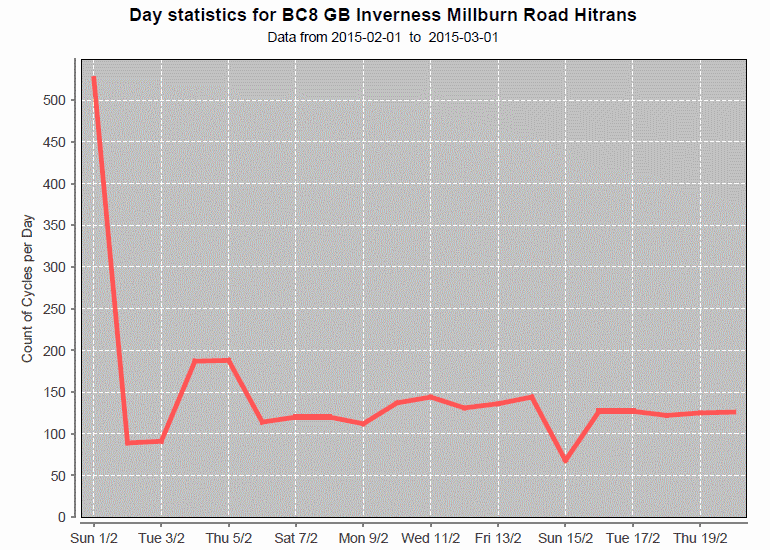 The count of about 530 on Sun 01 is clearly wrong and unfortunately dwarfs the other values.

There seems to be no 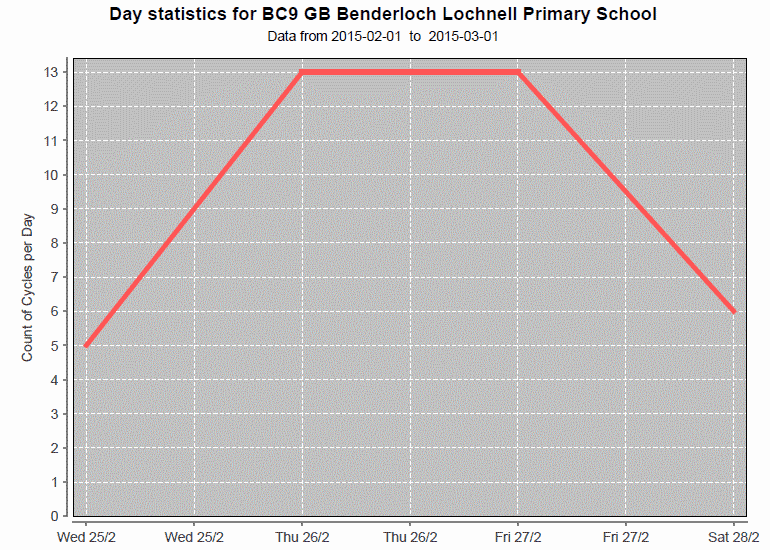 The counter was not active until Wed 25.

The automatic labeling of the horizontal axis has inserted dates twice.

There are really only four values. Early days.

Only BC3 and BC4 have data for the complete month but even that seems to be of low quality.
BC1, BC2, BC7 and BC8 show nothing after Fri 20. Of these, only BC1 seems to show reliable data.
The others contain unfeasible peaks and apparently missing data.
BC5 only has data for the first week and even that may be dubious.
BC6 only has the first twelve days. The values cover a wide range but could be correct.
BC9 only shows the final four days. Values are to low and too few for any comment.

Only BC1 (Middle Meadow Walk, Edinburgh) appears to be reliably informative.
In general, it would be better to indicate interpolated sections of a graph with a broken line.
Anomalous high values and missing values can be observed on all of the counters.
This is likely to be caused by a problem with the online system rather than individual physical counters.

The physical sensors are the most sensitive part of the system.
It is difficult for them to distinguish individual bikes in a group and different materials.
But they appear to do this job reasonably well.
Transmitting, processing and publishing the data should be the easiest part.
I'm disappointed as I find it difficult to understand why this system doesn't work flawlessly.
Unfortunately, I'm not sure if it will be fixed as it's not clear (to me) who is responsible for what.