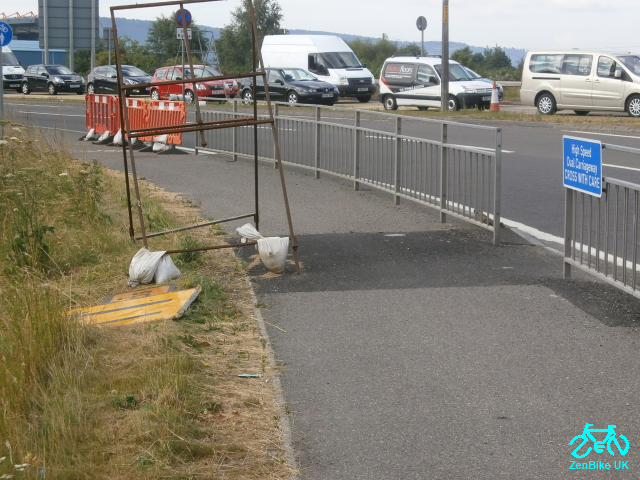 The cycle path was opened 3 weeks after Phase 1 was announced as completed.
So the diversion has been removed and normal cycle routes reinstated.
I cycled the route to check it out a few days after it had been re-opened.

The start from Longman Roundabout was disappointing.
The support for a fallen-down sign partly blocked the path.
A line of 3 barriers closed off a previous cycle crossing. 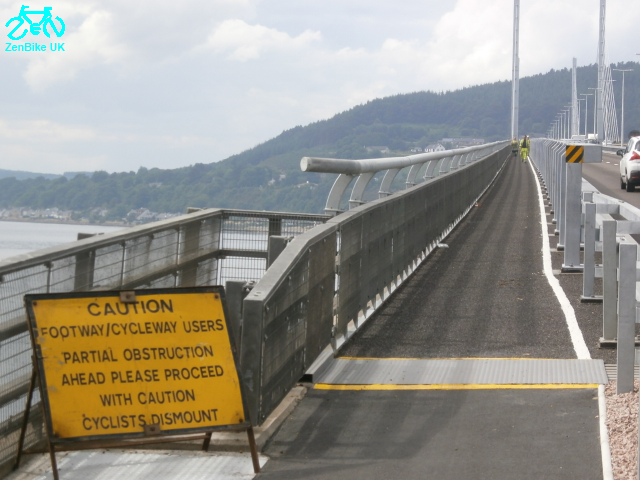 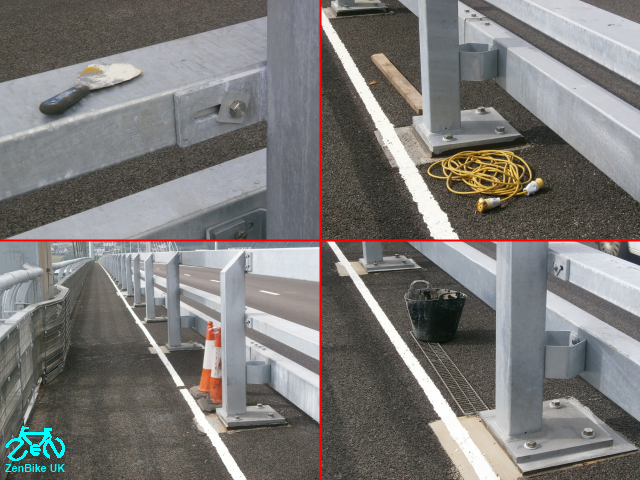 At various points, tools and equipment were observed.
But they had all been safely placed well to the side of the path.
The workmen were friendly and passing them was no problem.
I noticed occasional gaps in the white line.
These are at apparently random distances apart and a bit of a mystery.
It was suggested that this was 'to meet regulations'. 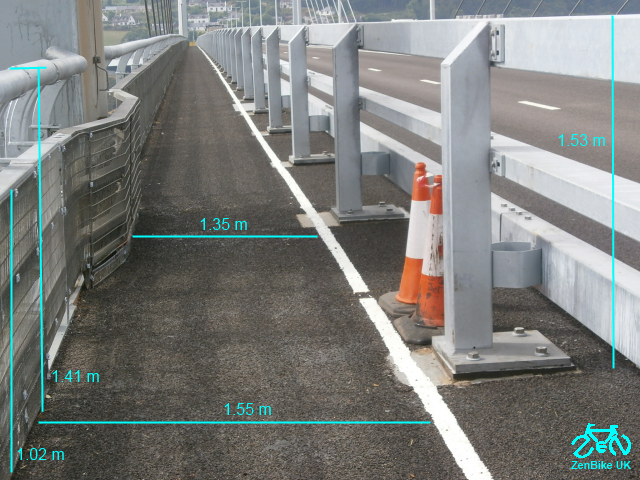 The path width and barrier heights were measured and are shown here.
The height of the original barrier has been extended by about 40 cm.
This has been done without affecting the path width at any level.
The path width is 1.55 m except at the two main pillars (1.35 m). 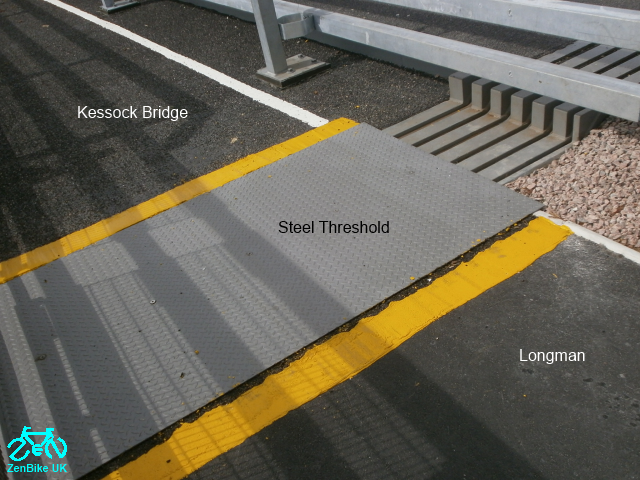 The path surface was a surprise.
The approach path surfaces at each end have not been changed.
There is a short section of tar at each end of the bridge.
This is smooth - very nice - like velodrome quality.
A steel plate with safety tread separates the bridge from the land.
But the surface on the bridge itself is extremely rough and unpleasant. 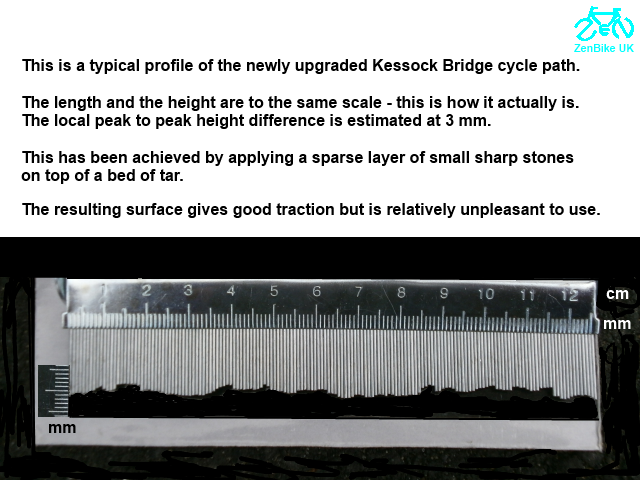 I used a template gauge to get a representation of the unevenness.
Small stones have been embedded in a layer of tar.
The stones are sharp. Their tops are 3 mm above the surface.
They have not been consolidated into a level surface.

If it's meant as a high traction surface then it's a total success.

Or is there some hope that cyclists will flatten the path over time?


Your comments are welcome.

Diversion on North side of Kessock Bridge


Phase 1 of the Kessock Bridge upgrade was completed at the end of June 2013.
I decided to check out the route and headed North from Inverness.
The biggest problems for cyclists are at each end of the Bridge.
(The South end of the Bridge and the Bridge itself are discussed in other blogs.) 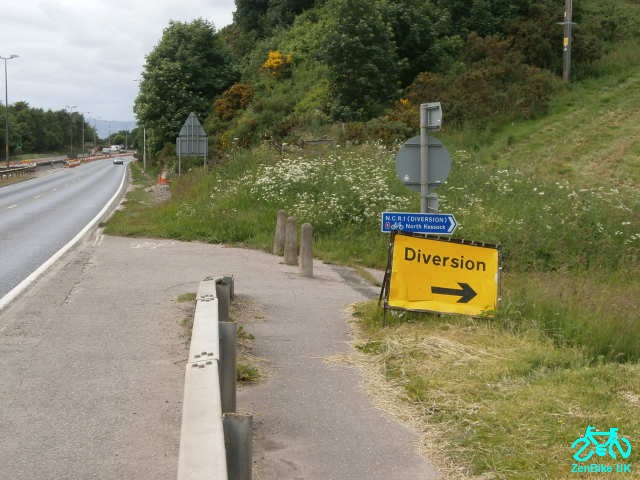 I took the cycle path on the North East side of the Bridge.
There was no choice as the upgraded path on the other side was still closed.
(I contacted Transport Scotland who said the path would open during the week 08 Jul.)
Immediately on leaving the Bridge at the North end, the cycle path stops abruptly.
There is a choice: cross the road or follow a diversion. 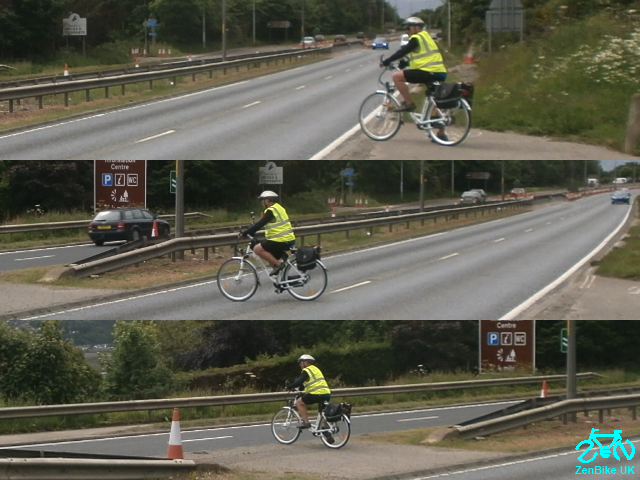 There is a painted bicycle indicating a crossing to the central reservation.
This matches a similar pattern on the opposite side of the road.
Crossing is the favourite choice for the vast majority of cyclists.
But it can involve a considerable wait for a break in the traffic. 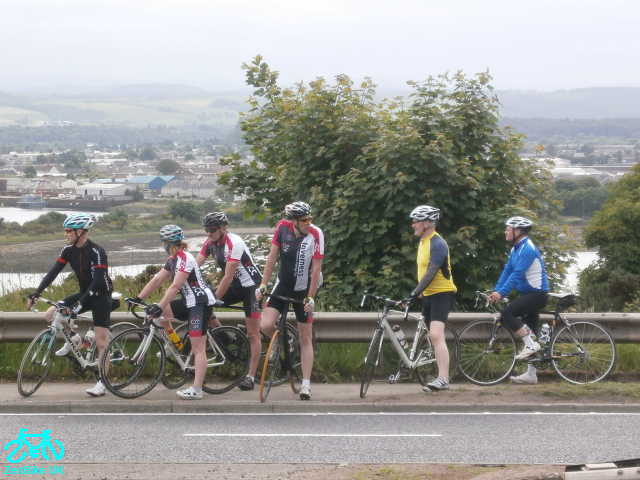 Obviously, the more eyes the better.
Even with lots of eyes, members of City of Inverness Cycling Club still took
a minute to get across and even then they had to cross each half separately. 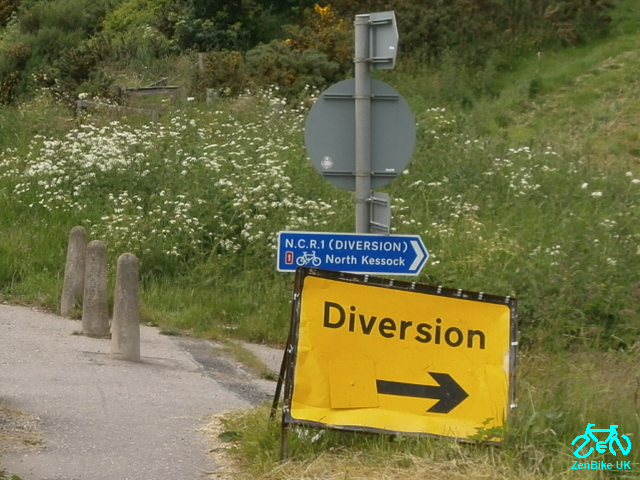 The blue NCR1 diversion sign is permanent, clear and suitably positioned.
(Note: The abbreviation NCR should be NCN - sustrans.org.uk)
So why is there also a large yellow sign that is simply a useless distraction.
I was tempted to say it's pointless until I noticed the arrow :)
It could easily get blown over and become a hazard. 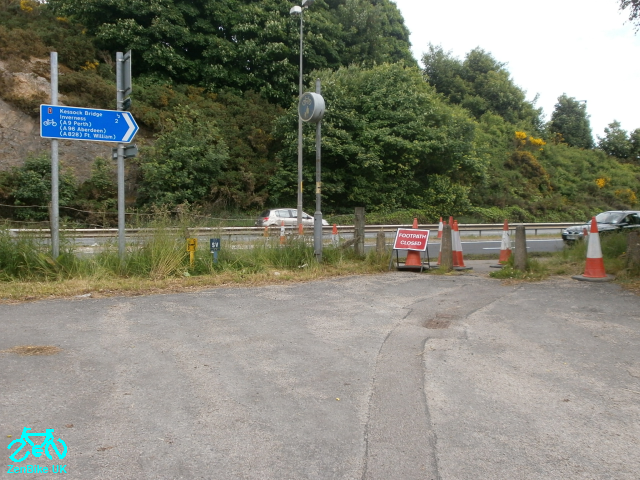 The indicated diversion is a long detour through North Kessock.
This involves a drop to sea-level and back to arrive at the other side of the road.
It's not surprising that most cyclists ignore the diversion and cross the road directly.

In an attempt to see the route the way a tourist might, I followed the diversion.
Eventually arriving (almost) at the other side of the road I was met by
a barrier consisting of ten cones and a FOOTPATH CLOSED sign.
A blue sign gives directions toward the Bridge but none the other way. 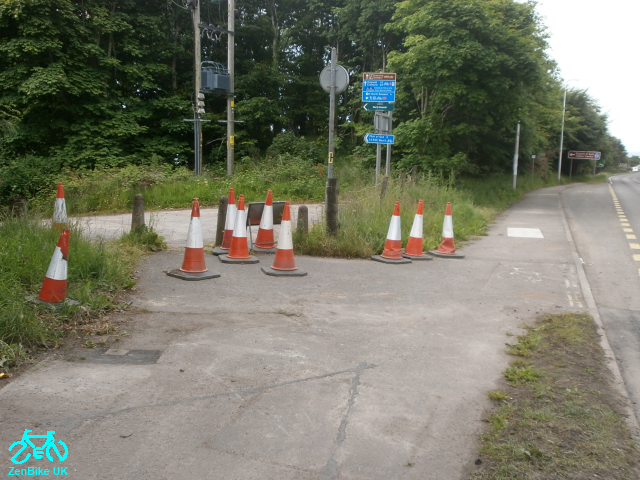 I went through the barrier to see what it looked like from the other side.
Clearly, the cones still blocked the way but there was no CLOSED sign.
None of this made any sense at all.

Having waited a fortnight for the 'imminent' opening of the cycle path
nothing has happened and the diversion is still in place.
I continue to witness and hear reports of cyclists (local and foreign) being unable
to understand what the diversion route is meant to be.


Your comments are welcome.
Posted by Zen Biker Maniac at 02:32 2 comments: 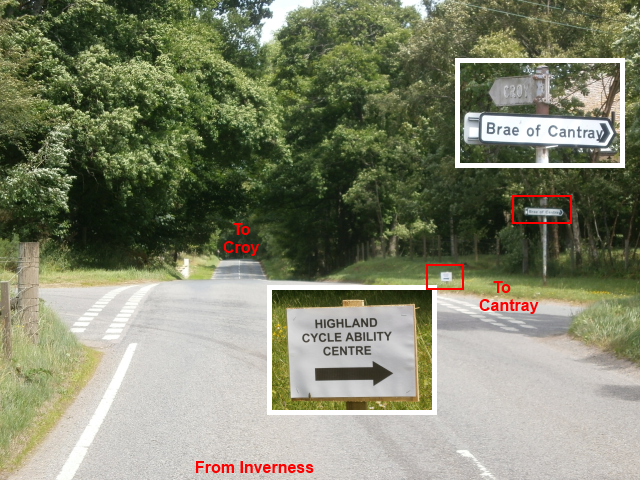 I'd heard about a newly opened cycle track not far from Dalcross.
I headed out of Inverness on the B9006 through Culloden Moor.

This photo shows the crossroads about a mile before Croy.
I turned off down the Brae of Cantray.
The route to the track was narrow and winding but well sign-posted.

I soon arrived at the Highland Cycle Ability Centre. 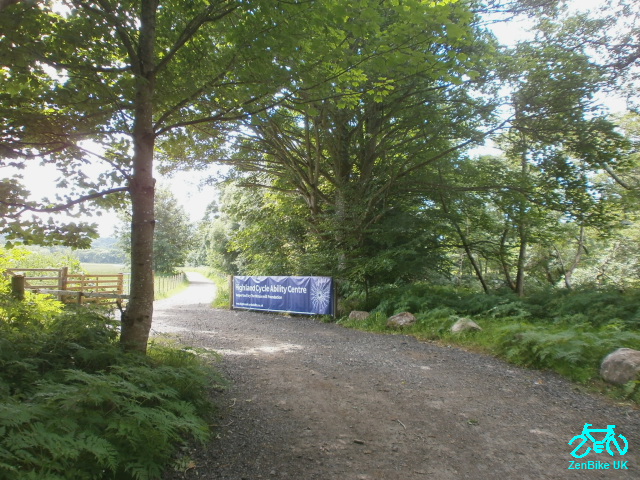 The Highland Cycle Ability Centre is situated near Croy
(actually Cantray) about 10 miles East of Inverness.
Visit the website for directions:
http://highlandcycleability.co.uk/

It can also be followed on twitter as Highland Cycle Track at
https://twitter.com/CycleTrack 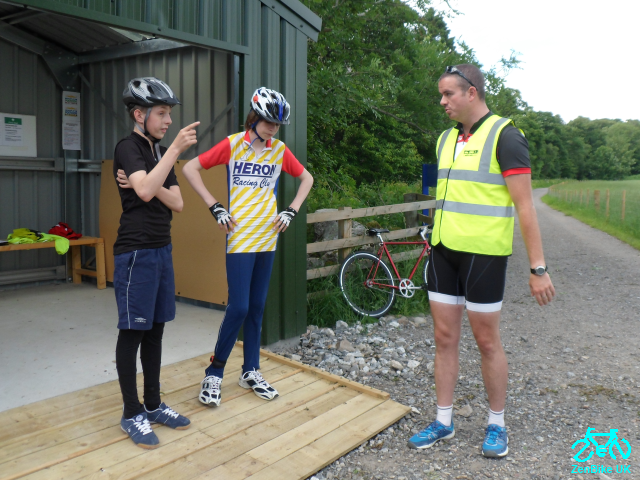 There are a few formalities before being allowed onto the track.
This is to ensure the enjoyment and safety for everybody using the track.

A fully qualified instructor is on hand to check that bicycles are in good order.
Bicycles can be hired but it's likely most riders will bring their own.
A quick briefing on track etiquette and they're ready to get started.

An electronic tag can be fitted near the ankle or to the bicycle frame. 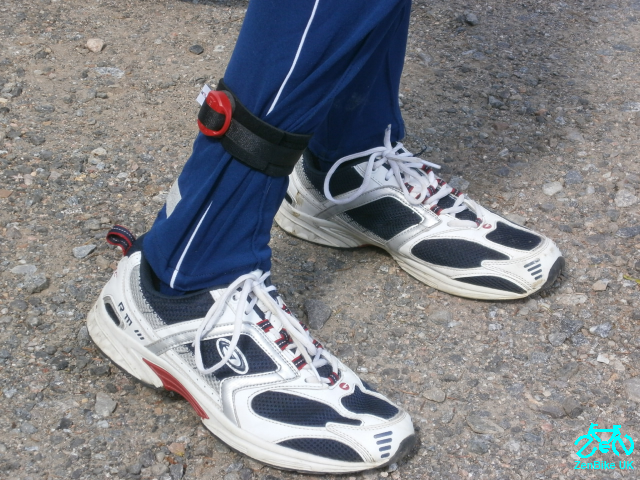 The track itself has a smooth surface over an accurately measured 1 km loop.

It starts with a level straight. followed by a sustained 3% uphill gradient.
The middle downhill section has a number of interesting turns. 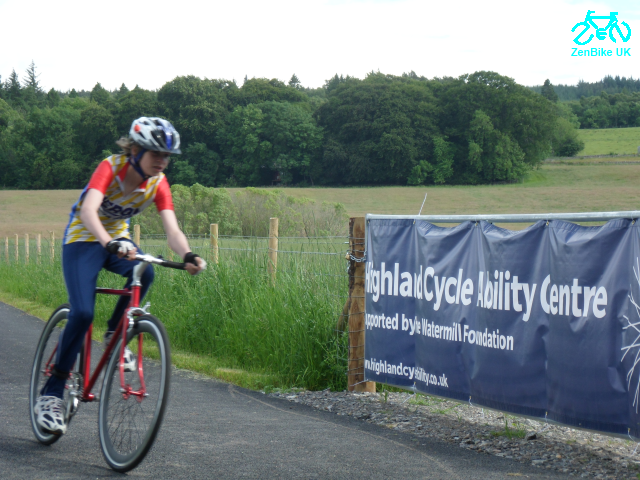 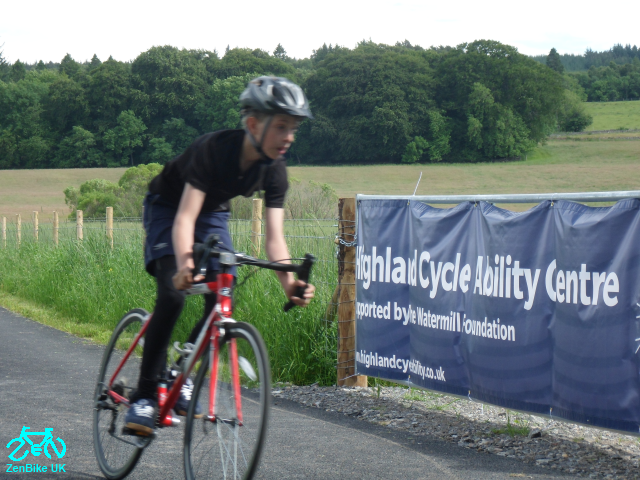 The track is wide enough for a group of about six.

Alternatively, riders can opt for staggered starts
to ride individually around the track. 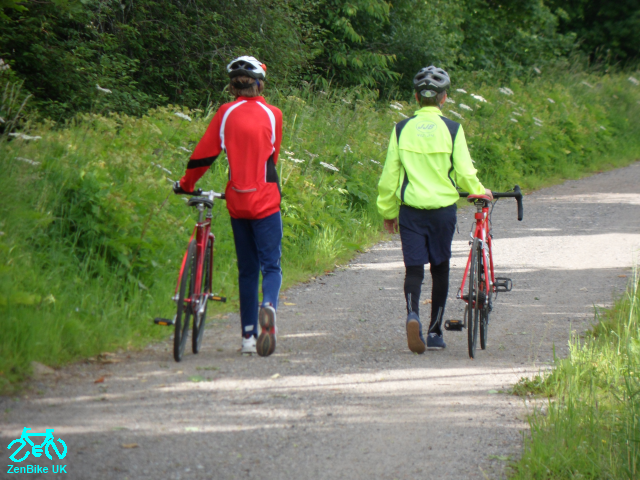 Today everybody had a good time. But who had the best time? That wasn't the point.
They all had a personal best - one that they would work to improve on their next visit.

Your comments are welcome.
Posted by Zen Biker Maniac at 00:48 1 comment: 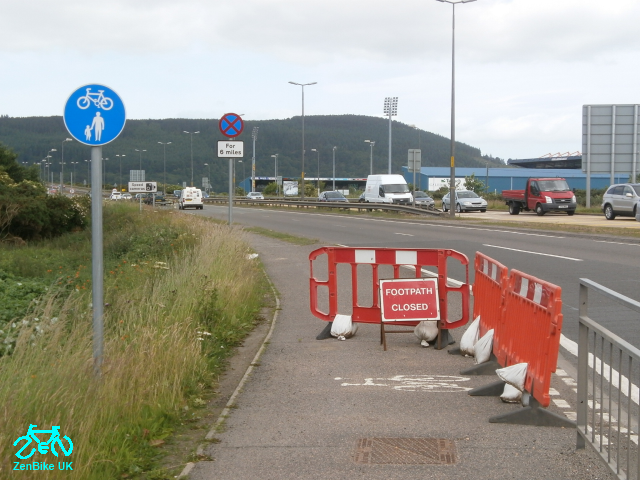 It's now a week since the completion of Phase 1 of the Kessock Bridge upgrade.
This appears to be good news for motorists. Unfortunately, it is not so good for cyclists.
At the South end of the Bridge the shared use pedestrian / cycle path remains blocked off.
The sign says "Footpath Closed" so you could be forgiven for thinking it's OK for cyclists. 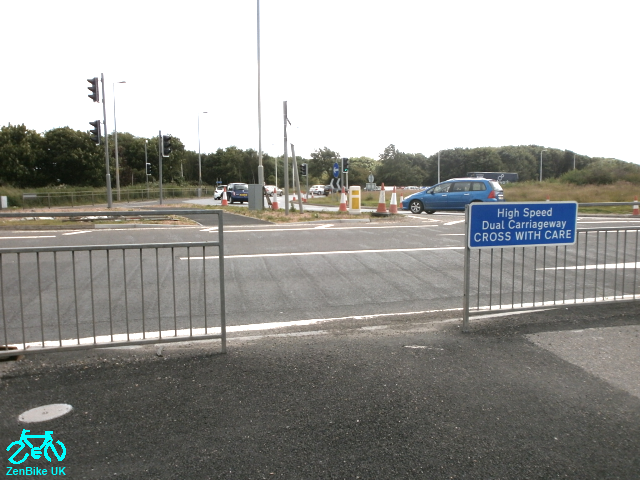 A little further back there's a break in the barrier to allow pedestrians / cyclists to cross. Although there are traffic lights there is no lights or buttons for pedestrians / cyclists.
The traffic on this side is a bit tricky but there is a frequent gap of about 10 seconds.
On the far side it is regularly stopped for about a minute giving plenty time to get across. A signal would be so much more useful and friendly than the sign:
"High Speed Dual Carriageway CROSS WITH CARE". 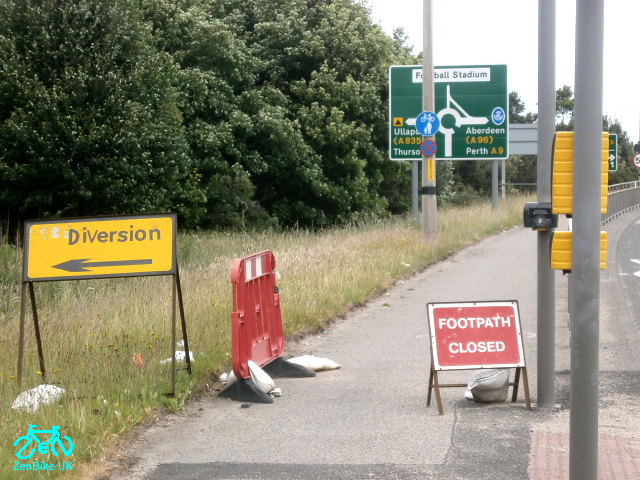 Further back, round the corner on Longman Road, we are presented with three objects:
A Diversion sign, an open barrier, and another Footpath Closed sign.
Again, what is a cyclist meant to understand from this? 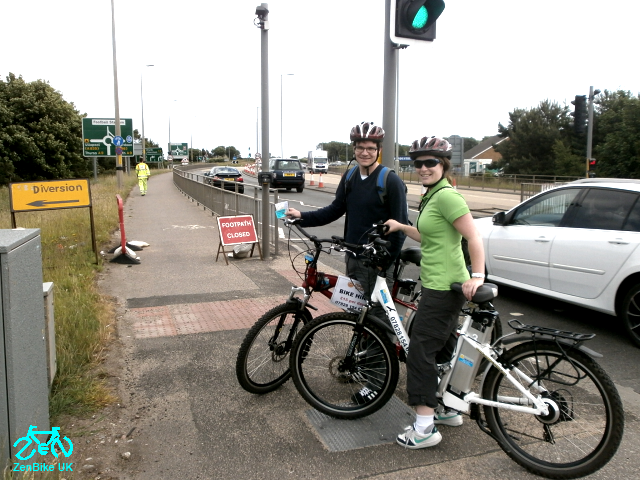 Inverness and the Highlands benefit a lot from tourists.
Here's a couple from the Hague who'd hired bikes from Happy Go Bikes.
They were heading North on a lovely day but were quite puzzled which route to take.
Let me be clear. They had a map - it was the signs and barriers that confused them.
I gave them directions to the Bridge and also what to expect on the other side.


Your comments are welcome.
Posted by Zen Biker Maniac at 15:14 No comments:


The end of June 2013 marked the completion of phase 1 of the Kessock Bridge upgrade.
So the beginning of July seemed a good time to cycle over the route. 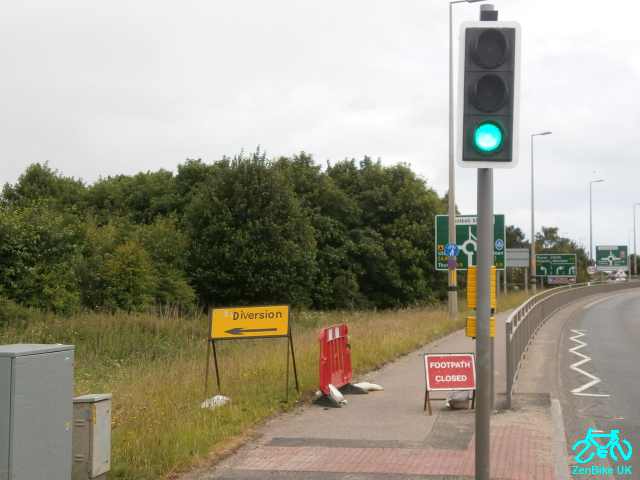 Approaching the bridge from the South, the first surprise was finding that the cycle path was still marked as closed.
So I did a quick check of the indicated diversion.
I'd reported on this previously: Shore Street to Kessock Bridge
I could see some changes but I was disappointed to find very little improvement.
Some misleading signs had been removed - but so had some of the useful ones. 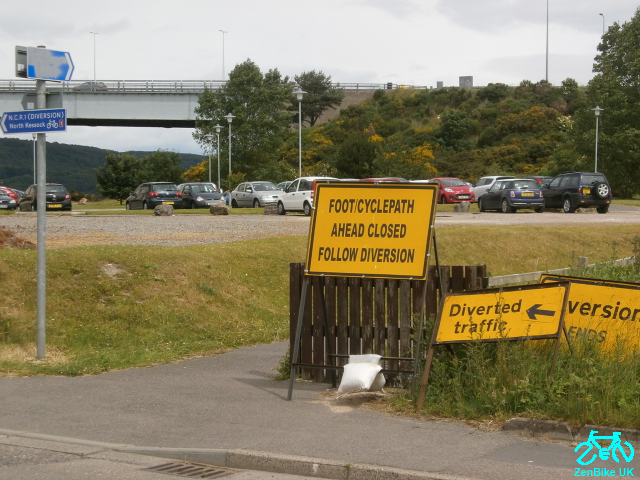 The end of the closed-off path had a bewildering collection of signs.
Some signs had been spray painted to obscure the original information.
This looked more like vandalism than an official correction.

I gave directions to two puzzled cyclists. They were local.
What chance do tourists have? 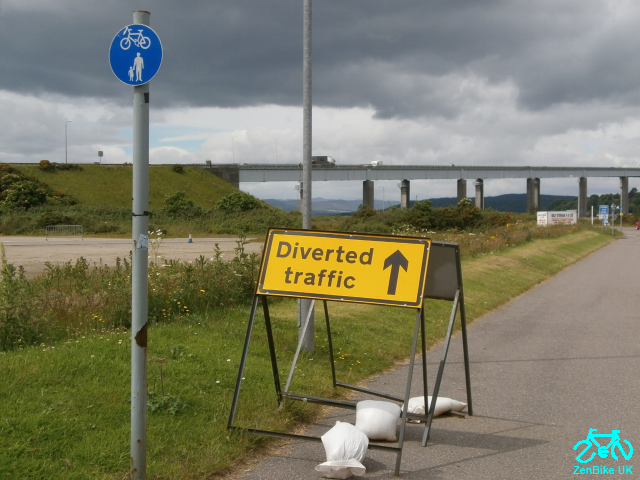 One rather unnecessary pair of signs partially blocked the path.
Hopefully this diversion will soon be unnecessary.
But currently the signage is unprofessional and untidy.
And worst of all - it doesn't help. 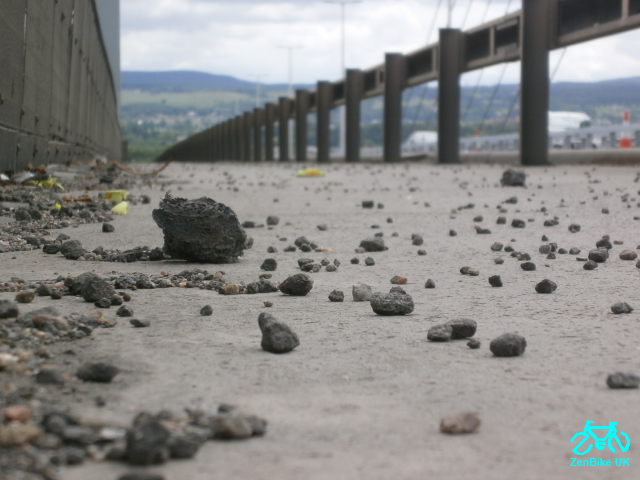 I continued and crossed the Bridge from the the South end.
The upgraded path on the South West side was closed off.
I'd expected it to be open. Indeed, I saw a cyclist using it.
I took the cycle path on the North East side of the Bridge.
The surface was extremely cluttered with small stones and general debris.


Your comments are welcome.
Posted by Zen Biker Maniac at 02:24 No comments: