A new shared path has recently been completed in Inverness from Morrison's Junction on Millburn Road to the Golden Bridge that crosses the A9 to the Inverness College UHI Campus.
The project included the installation of a Cycle Counter on Millburn Road.
Background information on Highland Council website: www.highland.gov.uk

The 18 week contract with a total budget of £733,000 was completed a week early.
Those involved with the delivery of this new infrastructure are justly proud of their efforts however the project has also attracted some criticism.
Local newspaper article: www.inverness-courier.co.uk

The most serious concerns have been raised over the King Duncan's Road section. Although these concerns may be well-founded, an ideal alternative would have been much more costly. 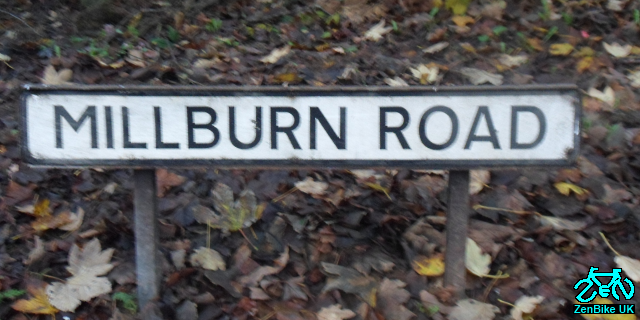 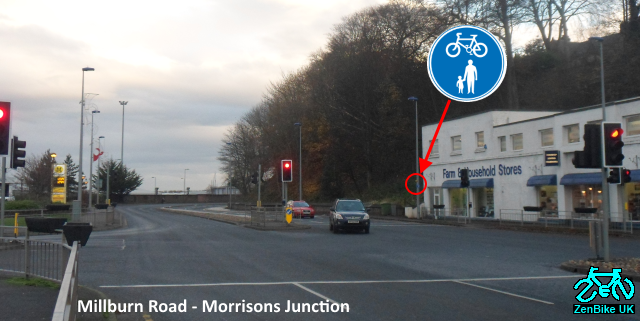 The path is on the south side of the road. So if you're cycling from the City centre you immediately have two problems:
- Where does the shared path start?
- How to get to it? 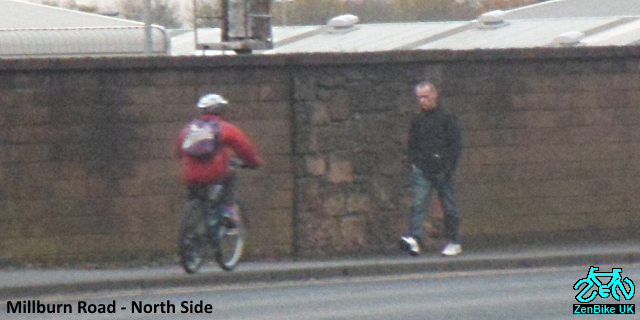 There is a small "Shared Use" sign on a lamppost on the diagonally opposite corner of the junction.
There is a two-stage Toucan Crossing with chicane barriers.

But the route is awkward and not sign-posted.so is still not uncommon to see cyclists on the north side pavement. 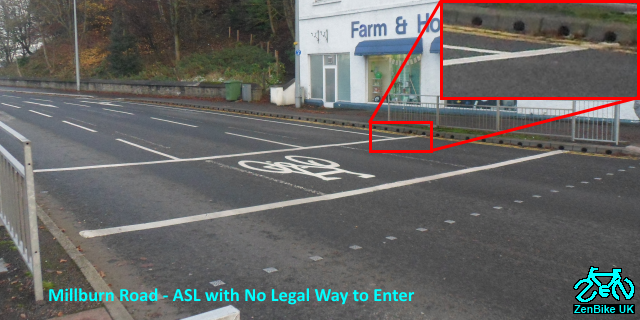 The west-bound carriageway has three vehicle lanes and one filter cycle lane. An Advanced Stop Line (ASL) extends across the full width with an associated cycle reservoir behind it.
It deviates from Cycling by Design in two respects:
- The reservoir and lane are the same colour as the rest of the road.
- The continuous painted line wrongly appears to bar cyclists from entering the reservoir. 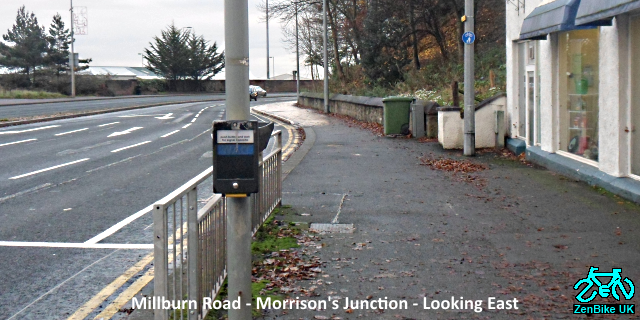 The start of the shared path on the south side is not clear apart from the small circular sign on the lamppost where the ASL filter lane starts.
The shared path is 3m wide between the low retaining wall and the kerb. Unfortunately, a fixed bin reduces this to 2m.
It would seem that this could easily be improved by re-locating the bin to the corner in front of the shop. 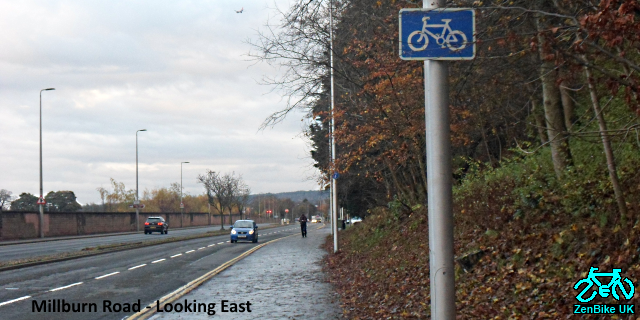 Small "Shared Use" signs are appropriately displayed along the route.

There is a solitary rectangular cycle sign that means "Recommended route for pedal cycles". Its purpose is a mystery as it faces away from the road traffic.

The signs are around 3m above ground level. This seems excessive as, being small, they are not at all obvious. Re-positioning at 2m might be more sensible. 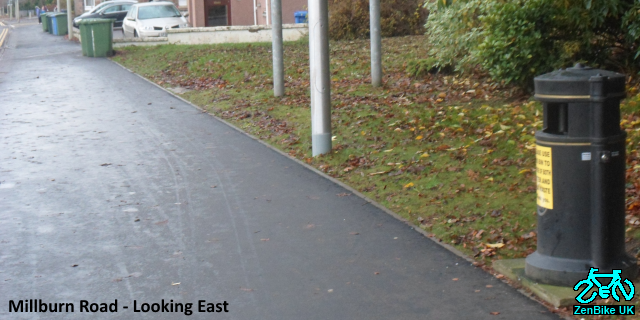 A Council bin for litter and 'dog poo' is conveniently placed off the path. This is appreciated and highly commended. 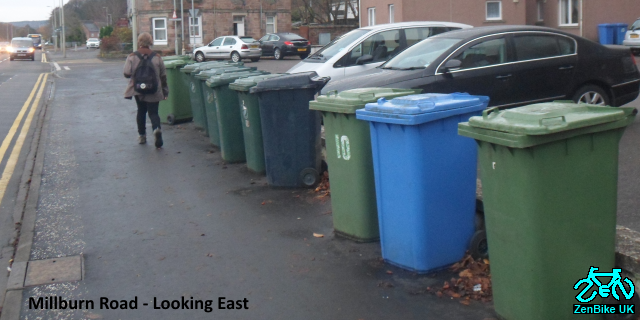 However, bins for nearby housing partly obstruct the path.
The presence of several different colours suggest this is their permanent position. 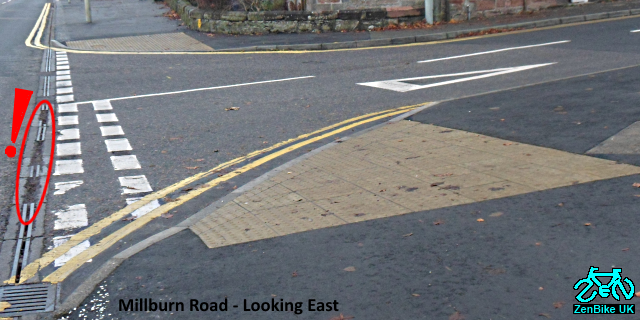 The path on each side of the junction with Victoria Drive ends with a patch of tactile paving and a dropped kerb.
It is clear to drivers that the road is meant for vehicles. There is no signage but if there was it would probably say "Cyclists Dismount".

The really crazy thing here is that cyclists travelling west, into the City, can assert priority by transferring briefly to the road!
They then have a different problem: Avoiding the broken / missing drain covers. This has been an unfixed safety issue for some time. 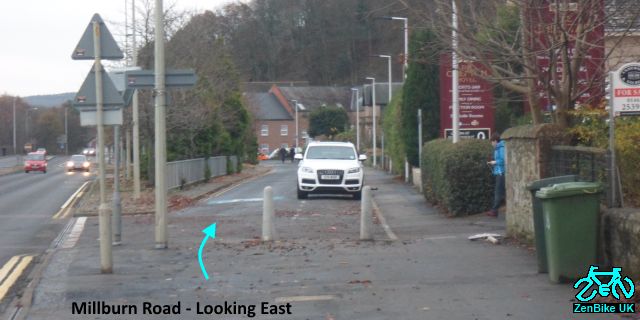 The next short length of shared path ends at two well-spaced bollards. Cyclists continue on the quiet access road. (This road and the dual-carriageway are both called Millburn Road.) 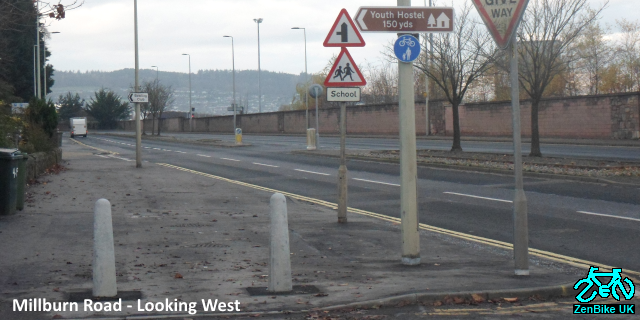 Looking back, there's an unfortunate collection of necessary signs.

The "Shared Use" sign looks a little lost among these.
It's only on the lamppost because it's convenient and as a result ends up being close to the roadway.
"Shared Use" Signs on the bollards might be better. 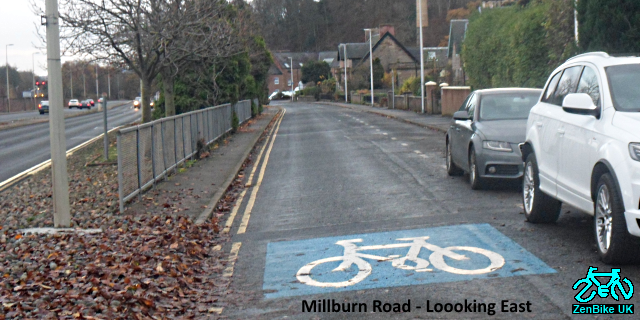 The access road is usually fairly quiet. A large cycle sign is painted on the road at each end.
This could be taken (by cyclists) to imply some kind of cycle priority.
But the intended message is uncertain and may be differently received by drivers. 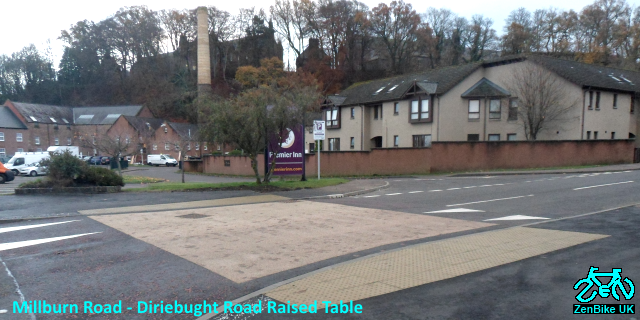 The junction at Diriebught Road includes a raised table. Its main effect is traffic calming.
However it confers no priority to pedestrians or cyclists wanting to cross.
Some drivers may stop out of consideration or ignorance. Currently there seems to be some uncertainty which may or may not be a good thing. 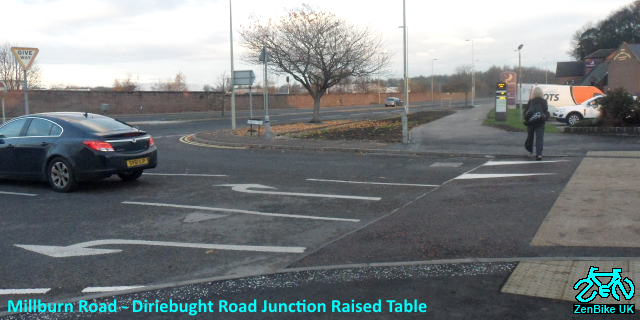 It appears that a guiding principle was to gain the maximum benefit with the least change.

An unfortunate consequence has been that the newly-built raised table does not align with the cyclist / pedestrian "desire line". 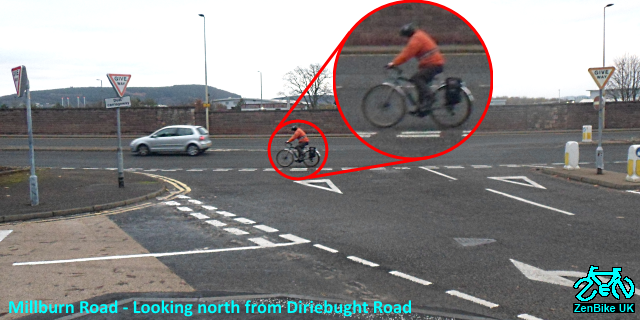 Thus pedestrians and cyclists may avoid the raised table and make their own route.

Regardless of the planners and critics, it is the users who will ultimately decide the success of this route ...
... and some have already decided.

It would be interesting to compare results from the cycle counter on the path with one on the carriageway. 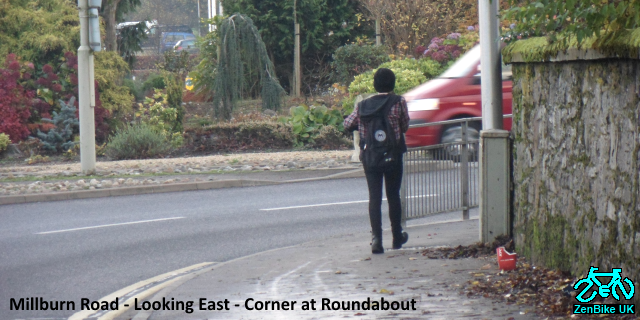 As it approaches Millburn Roundabout, the path goes round a tight corner where the available path width reduces to 2m.

There appears to be enough space for this to have been alleviated by moving the end of the wall.

Once again, it is likely that some cyclists will choose to avoid conflict by using the road instead.

The Millburn Road cycle path may be the best that could be achieved in the circumstances.
As is often the case, the path itself is generally a great improvement to cycling on the carriageway.
There are some minor problems but the big problems are at junctions.
An ideal cycle route consists of relatively straight (and hopefully level) paths with safe junctions

If cyclists feel that even one junction is unsafe they will not be comfortable using the route and may not cycle at all.
Millburn Road is better than it was but will still not be seen as safe by some potential cyclists.

So how does the Millburn Road section match up with Cycling By Design's Core Design Principles?
- Safety - Perceived risk (the key barrier to cycling), specifically at junctions, has been reduced but not minimised. There are some instances of ambiguity.
- Coherence - The location of the west end (start) of the route is not clear and navigation is uncertain at Diriebught Road. But the build quality is good. More cycling network is needed. Currently there isn't much else for this route to be coherent with.
- Directness - The route is fairly direct but interrupted at junctions. This may be a strong deterrent for some current or potential cyclists.
- Comfort - The surface is smooth, level and suitable for all forms of everyday cycling, including tandems, trailers, ... The path is shared but this is acceptable to most users as the width is mainly 3m.
- Attractiveness - Much of the route is along the foot of a wooded bank with another main section along a quiet road. It blends in well with the area and scores well here. Let down by the bins.

Your comments are welcome.
Posted by Zen Biker Maniac at 02:58 5 comments: