The First Pedal on Aberdeen 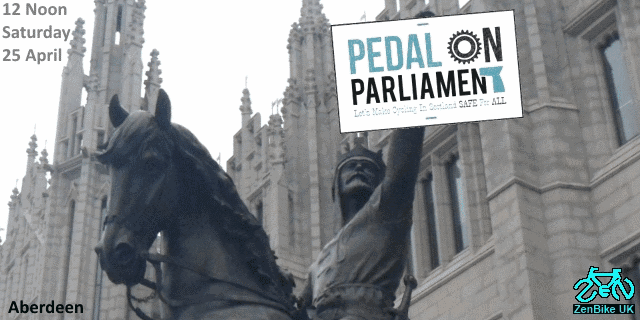 2015 is the fourth year of Pedal on Parliament in Edinburgh. Aberdeen Cycle Forum (with the support of the PoP2015 Team) decided to organise their own ride from Hazelhead Park to Marischal College to take place at the same time as the one in Edinburgh.
So I made an early start with my folder on the bus from Inverness. 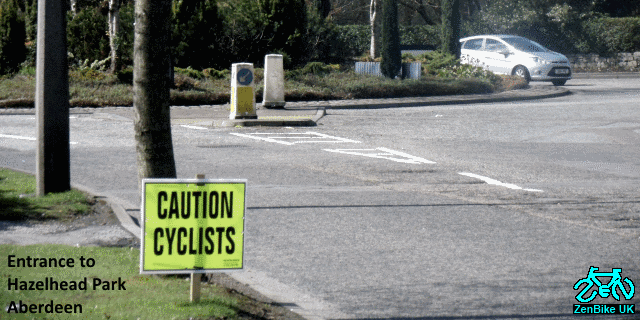 I got off the bus 4 hours later at Foresterhill Hospital and cycled up towards Hazelhead Park.
'CAUTION CYCLISTS' was the first sign that I was close to the start. ('Here be dragons!')
Clearly, Aberdeen motorists are not used to seeing cyclists on the road. 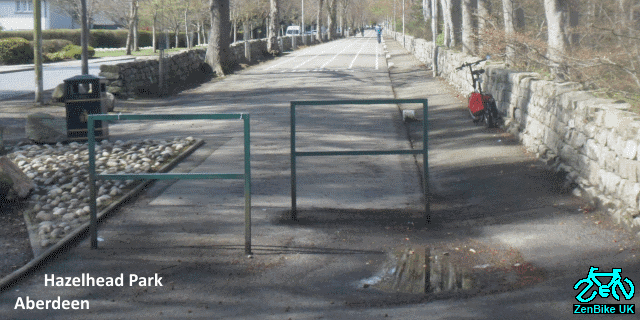 The forecast had been for rain but it was a surprisingly sunny day. The chicane barrier reassured me that I was on the right route. 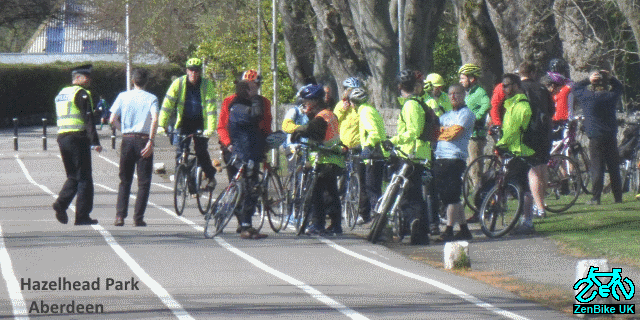 In the distance, I spotted a small group. Not quite the thousands that would be assembled at the Meadows in Edinburgh. But I could see some hi-vis and helmets and a police officer ensuring good order.

It was still 15 minutes before the start and there was a steady stream of newcomers. 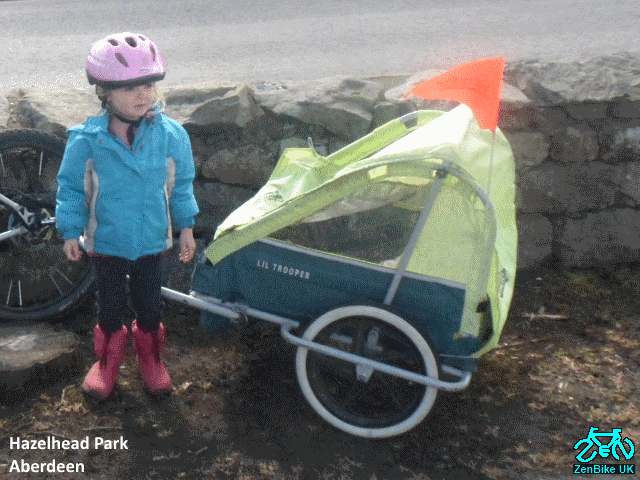 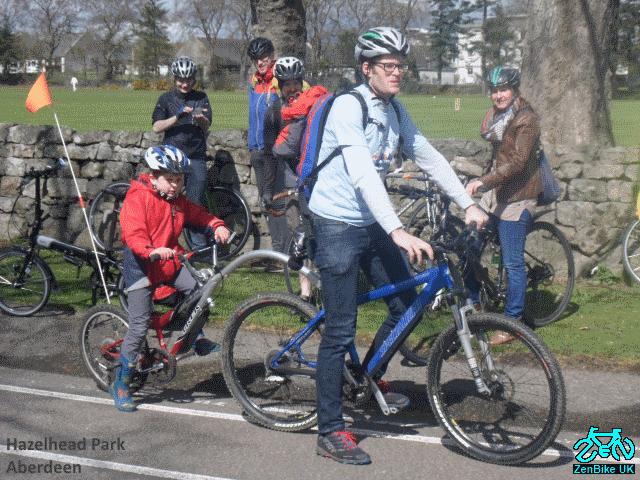 As you might expect, there were people of all ages (and a Unicorn) and various trailers and tagalongs. 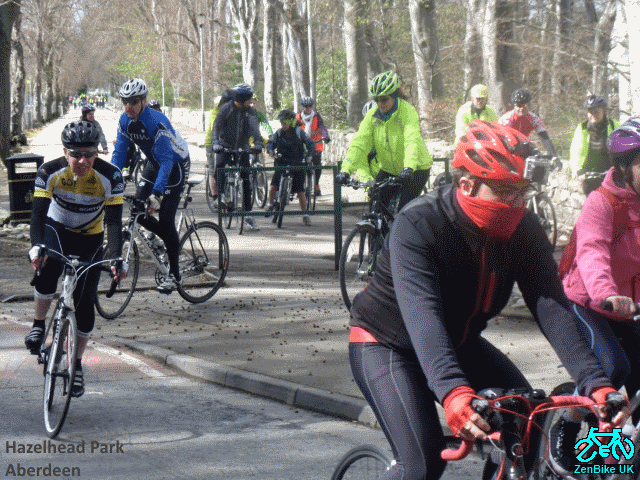 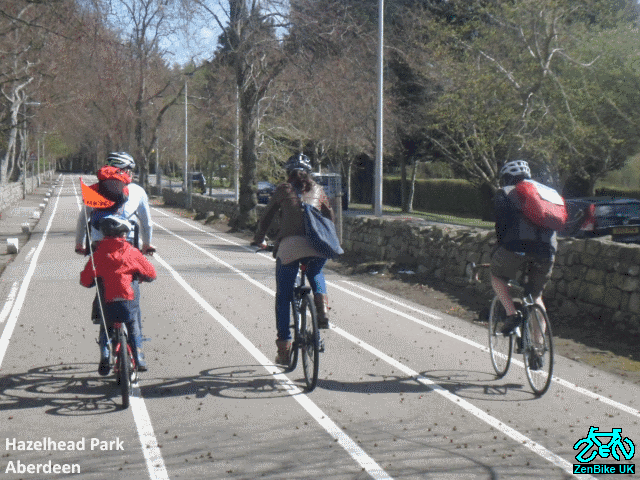 At noon, we set off sedately, in 4 groups of about 25 as advised by the police.

There was a momentary shambles getting through the chicane but everybody got off to a good start. 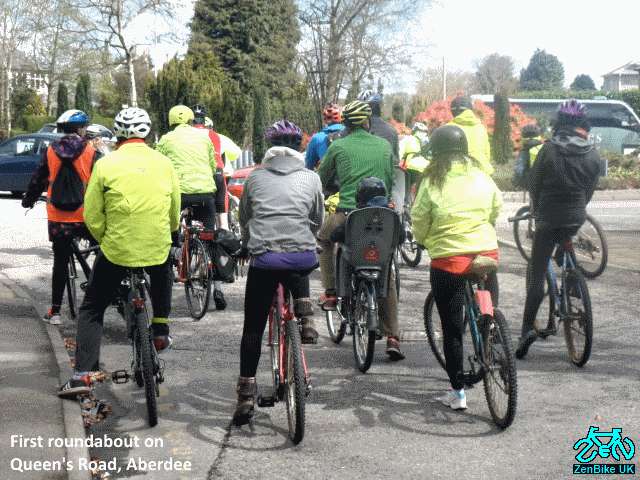 A brief stop to take in the traffic at the first roundabout as we turned right into Queen's Road. Just minutes after the start, the groups were merging, breaking up and reforming into new groups.

A (motorcycle) police officer at this point would have been to the benefit and safety of all road users. 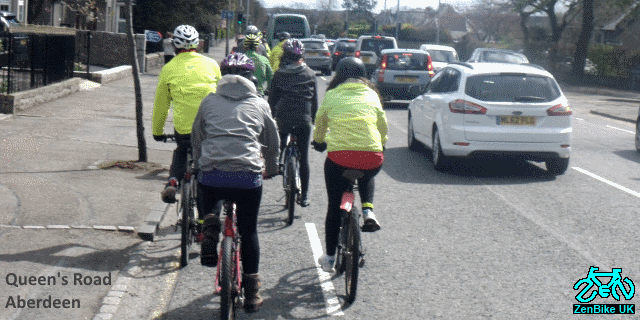 On this section of Queen's Road there is a narrow advisory cycle lane. In comparison, the main lane is quite generous. But the cyclists hug the gutter and are reluctant to move  closer to the traffic. 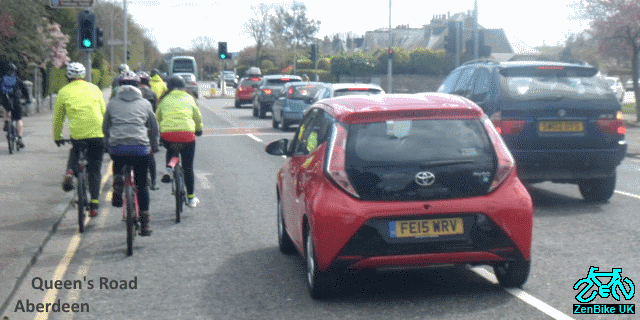 No cycle lane here so it would be reasonable for cyclists to take one of the lanes.
A cyclist on the pavement, a group of cyclists in the inside lane, a line of cars in the outside lane - and a driver that likes to 'tear along the broken line'.
You can see why some would feel safer cycling on the pavement. 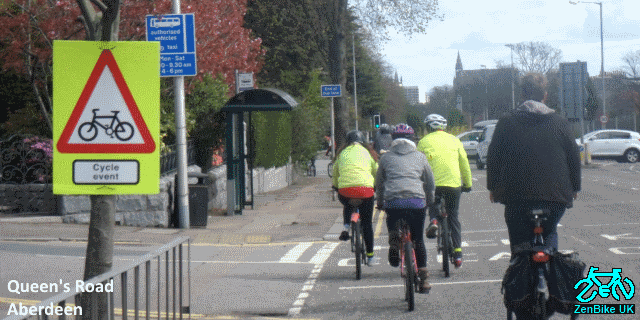 A rare 'Cycle event' sign. (Looks a bit non-compliant.)
Queen's Road and Union Street have many brief sections of bus, cycle and taxi lanes that only apply during rush hours.
This one extends a little before and after the bus shelter. 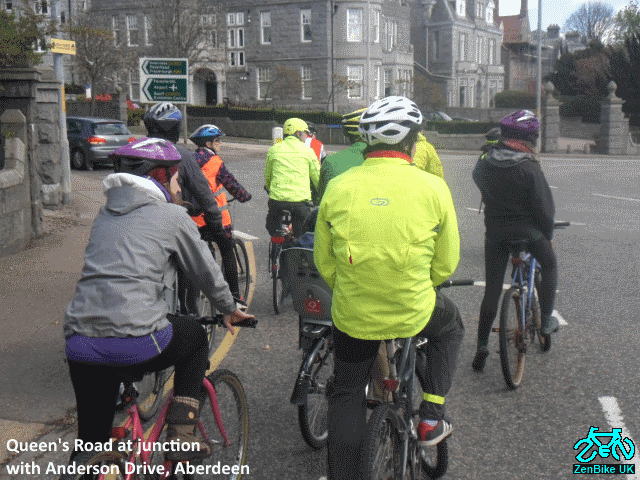 Another stop to view the traffic as we prepare to cross the roundabout at Anderson Drive (aka A90) dual carriageway.
And another missed opportunity where (motorcycle) police officers could have briefly directed traffic so that the riders could cross safely. 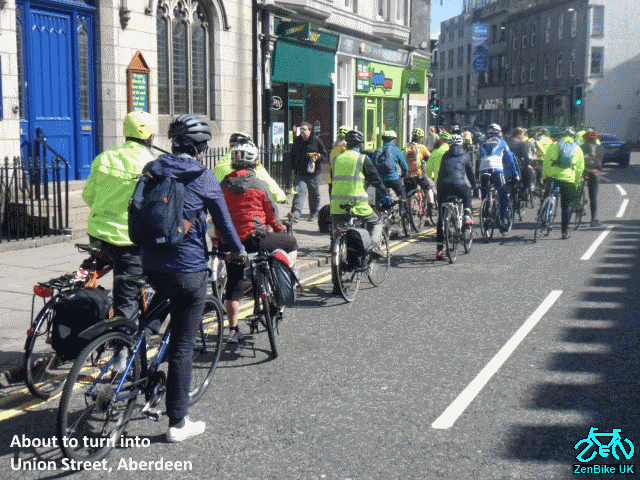 This group was quite near the front and had reached a noticeable size by the time we were preparing to turn the bend into Union Street. 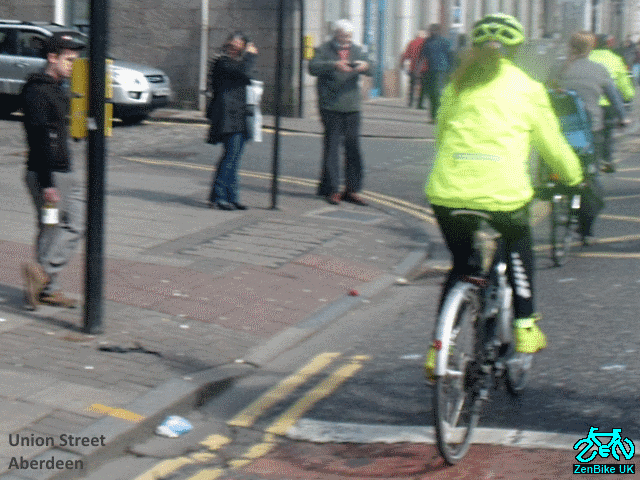 The weather was holding out and there were plenty people out on the streets. A man on the pavement thought it worthwhile to take a video. 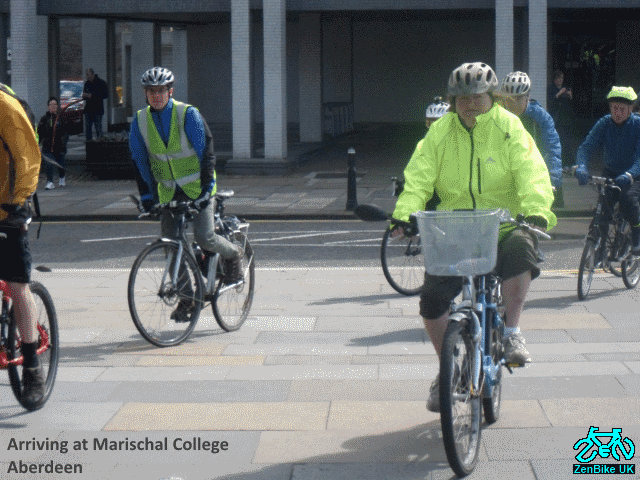 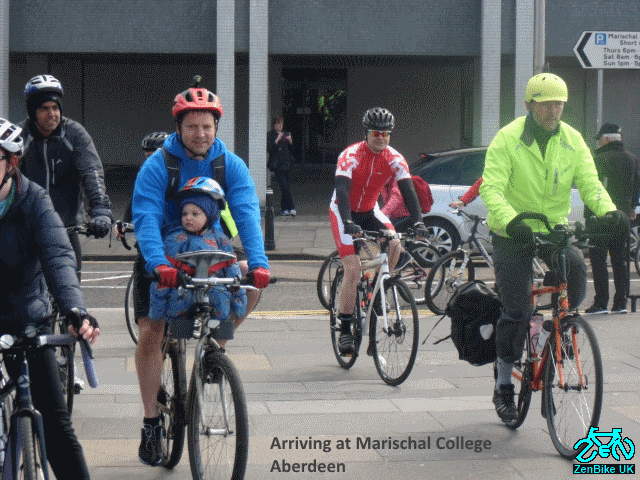 A chance to meet with other riders and those who had just gone directly to Marischal College.

I heard an estimated number of 125.

Committee Members from Aberdeen Cycle Forum (ACF) took the opportunity to speak to local politicians.
(There were some Aberdeen Councillors present but I didn't manage to get any pictures.) 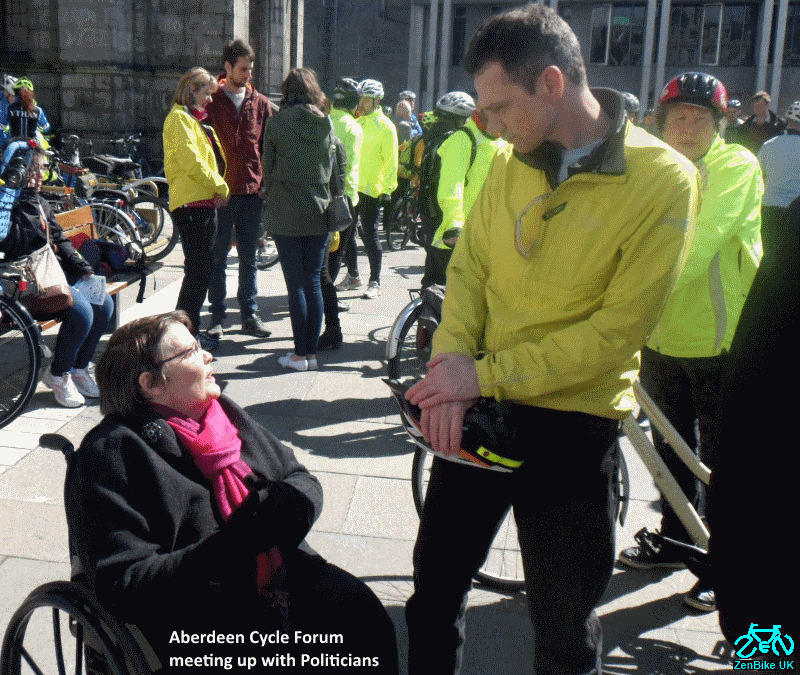 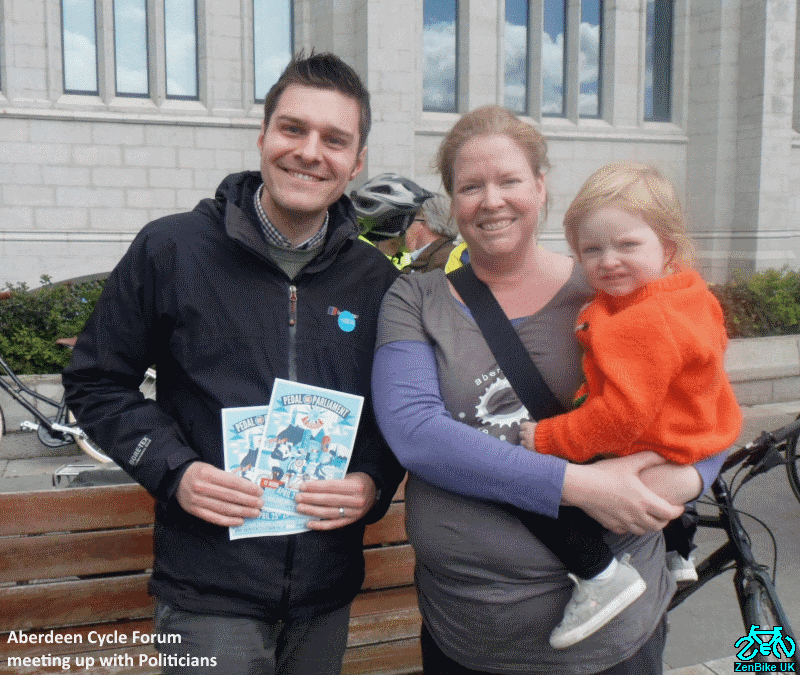 
The weather remained a bit cold but sunny. People had time to meet and talk together.
It was a very enjoyable and friendly atmosphere to relax in. 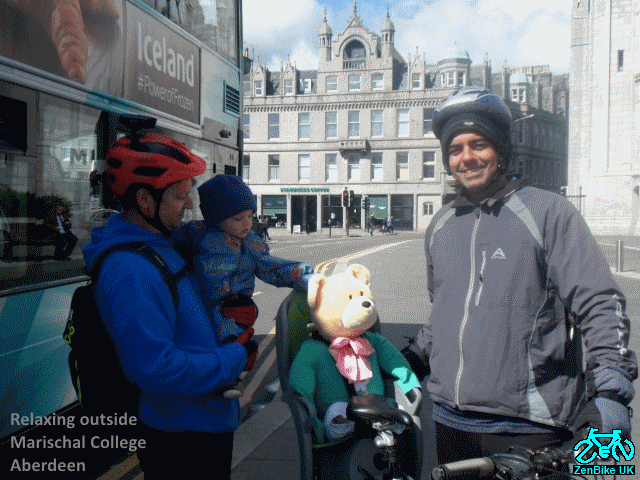 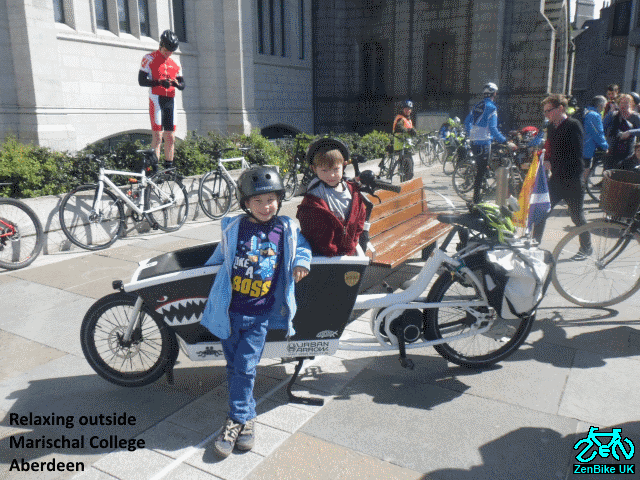 It was a great pity that there were no speeches as they have in Edinburgh.
This meant that assembling at Marischal College had no proper focus.
I felt that, at the very least, someone should have led a cheer.
People stayed there for a while and then gradually drifted away.
No doubt it could have been better, but nothing went wrong and everyone had a good time.


Your comments are welcome.
Posted by Zen Biker Maniac at 00:30 1 comment: 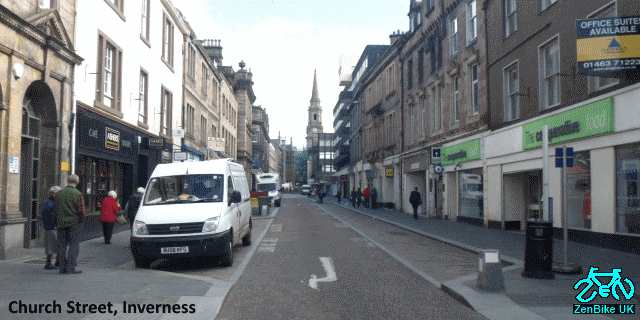 On Thursday afternoon I went for a cycle around the centre of Inverness. Church Street is one-way and normally one of the busiest routes. All sorts of vehicles such as buses, taxis, vans as well as cars, moving and parked, make it very congested. But this time I had an uninterrupted view from the middle to the High Street. 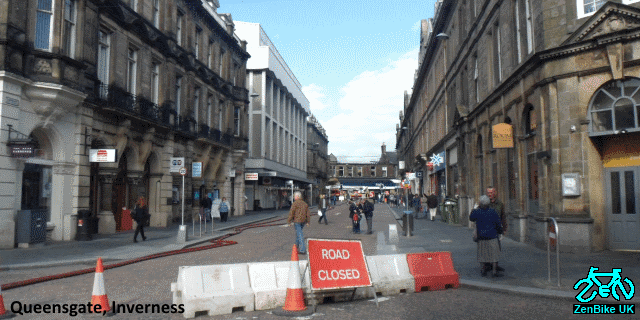 Looking to the left, I could see that Queensgate was closed off. It's also normally a congested one-way street. Even with bus stop bays on one side and car park bays on the other, it can still accommodate two lanes of traffic that become three lanes at the far end. And that still leaves room for a wide footway on both sides. 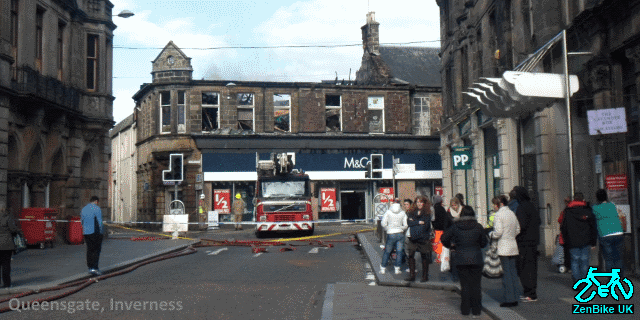 The reason for the closure could be seen at the far end, on Academy Street. A Fire Appliance was still in attendance at the scene of a fire that had started about 10pm on Wednesday night.
[Link to report by Chris Foote : STV News]
The building was still smoldering and the junction was sealed off. 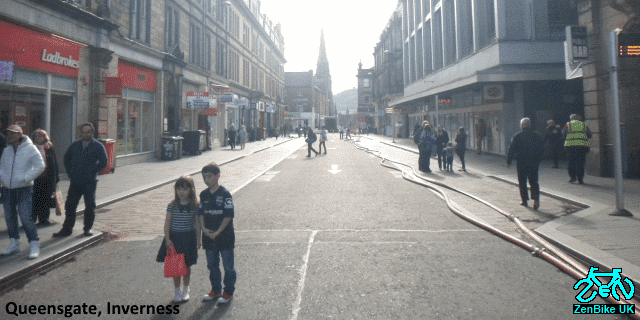 The view from the junction back along Queensgate was completely clear of vehicles. Pedestrians were walking about freely. Some stood and watched the clear up work at the site of the fire. 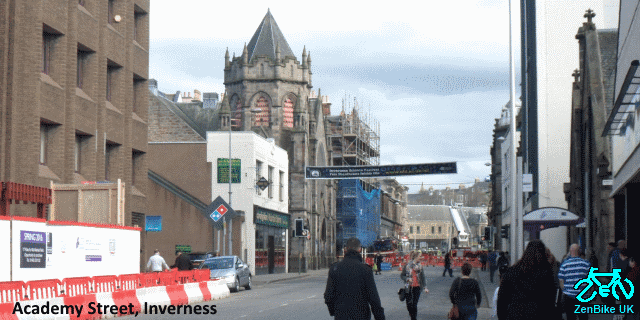 There was light traffic in Academy in the West end of Academy Street. This is usually very busy with two-way traffic and street parking on both sides. Here too, the pedestrian experience was much more relaxed. Not even Poynton is ever this good. 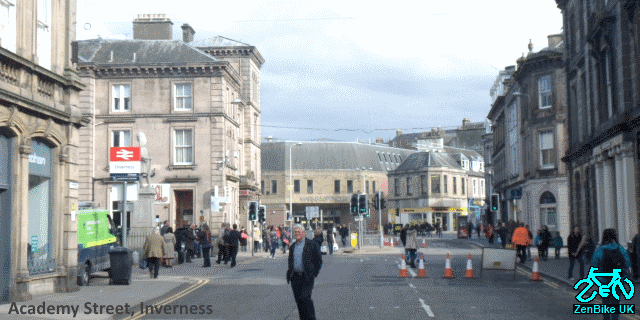 From the closed junction looking East was a very similar picture. On a normal day, taxis in and out of Station Square regularly struggle with the main flow of buses and other traffic. Instead, people were able to walk about quite casually. The small amount of traffic that was there was moving very slowly and carefully. 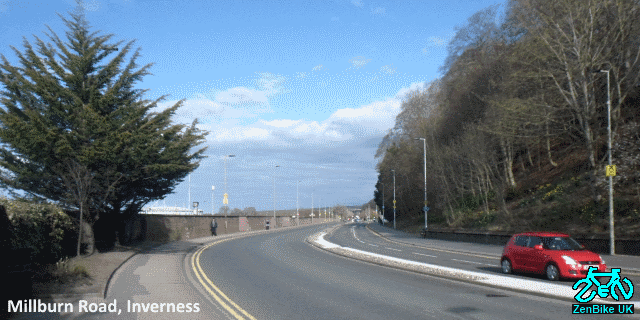 Further East, on the way out of the centre, Millburn Road was surprisingly quiet particularly for about 5 pm on a Thursday. It is a dual carriageway with two lanes in each direction. I actually had to wait to catch this picture of a car.

No doubt, there are major queues on other routes as a result of displaced traffic.
Businesses will probably report lost trade. But, given time, trade is more likely to improve.
Officials and Councillors should be taking this opportunity to observe the benefits of limiting traffic access to the city centre.

It would be nice to say that one consequence was an increase in people cycling.
The Millburn Road counter data does show an increase of about 100 (above the current daily average of about 175). However this all appears to be in an hour period around 5 pm.
Unfortunately, in the light of previous experience, I'm inclined to disregard this increase simply as a bad data.

Your comments are welcome.
Posted by Zen Biker Maniac at 02:08 1 comment: