Be Careful What You Ask from Santa 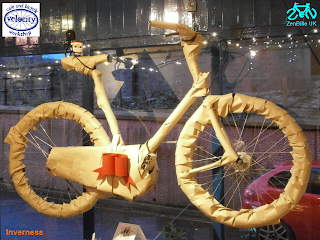 At this time of year attention may turn to the accumulating pile of parcels under the tree (or hanging from the ceiling).

There's the excitement of trying to guess what's in the parcels.
But some things may not always be what you imagine.


[Thanks to Velocity café and bicycle workshop, Inverness for permission to take the photo.]

I was prompted to write this after reading Kezia Dugdale's recent blog: Cycling on Easter Road

Kezia's blog relates to her contribution to a debate in the Scottish Parliament and the response from Keith Brown, the Minister for Transport and Veterans.
The debate on 29 Oct 2013 was on a motion raised by Alison Johnstone about Strict Liability.
Scottish Parliament 29 Oct 2013 - (Final item on agenda)
My blog does not concern Strict Liability directly but a safety issue that arose out of the debate.

In his concluding remarks to the debate (18:07), Keith stated that he was supportive of most of the statements in the motion but was held back by the lack of robust evidence.

Earlier (17:29), Kezia said that it was people like herself who needed to be persuaded that cycling is a safe activity. She felt that too many people find themselves at risk when trying to cycle to their work because our roads just are not safe.
She said that she cycles fairly regularly on two routes. But there was no way she would cycle to work, because that would involve cycling up Easter Road in the morning at peak times; which she considered just too dangerous.

In his contribution. Keith referred to Kezia's comments about Easter Road.
He said that one of the officials from Transport Scotland (who was present) regularly cycles up and down Easter Road and feels that it is a safe road to cycle. He (Keith) recognised that these things are subjective, depending on people's experience and perception of the environment around them.

A blog by David Hembrow identifies Three types of safety. They are perceived safety, actual safety and social safety.
As you might expect, any particular case will often include multiple elements of safety and the three categories will affect each other. For example, a cyclist jumping a red light may feel quite safe (perceived safety)  but still puts themself in danger (actual safety) and possibly others (social safety).
Actual and social safety can be quantified and supported with statistics of injuries and deaths.
But perceived safety is intrinsically subjective. It depends on the cyclist's emotional reaction.

What Kezia and Keith were debating in parliament was perceived safety.
Kezia was concerned with perceived safety although the evidence in her letter to Keith was actual safety.
In his reply to this letter, Keith acknowledges that different people / cyclists may hold different views about the (perceived) safety of the same road.

There's a problem here. Keith wants to make policy based on robust evidence.
But the natural evidence for perceived safety is personal opinion.
How much opinion from cyclists would constitute robust evidence?
Indeed, would Keith accept any subjective evidence as robust or reject it as merely anecdotal.

The question is, what would robust evidence for perceived safety look like?

Keith also referred to the evaluation of Cycling Scotland's Nice Way Code campaign. [I've added emphasis.]
Preliminary results suggest that it has been useful in shifting public perceptions in favour of giving cyclists more space and respect on the road, particularly at junctions, and in leading to an increase in the number of cyclists who say that they feel comfortable cycling on the roads. There has also been an increase in driver awareness of pedestrians.

This clearly has a strong flavour of perceived safety only. And, if justified, it would be good because it's the perceived lack of safety that prevents many people from cycling. However, politicians want to base their decisions on evidence of actual safety.
I have not seen any official evaluation but will be interested to see how these perceptions are justified with robust evidence. I'll also be interested in Keith's reaction to it.

I wish you safe cycling (perceived, actual and social):

Your comments are welcome.
Posted by Zen Biker Maniac at 02:08 1 comment: 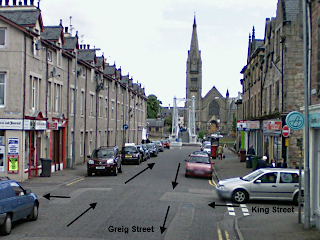 Looking along Greig Street, you can see the
Greig Street Bridge across the River Ness,

Greig Street is two-way but King Street that
crosses it is one-way.

A No Entry sign can be seen on the far side.

There is also a One Way arrow leaving the
junction but it is not in the photo. 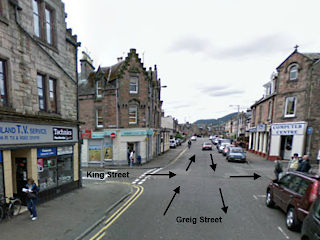 The view looking in the opposite direction
from the other side of the junction.

The second No Entry sign can now be seen.
In the previous view it was obscured by the
angled frontage of the shop.

One of the One Way signs is also visible.

[These two photos are from Google Maps 2008]


There are primary schools in both direction along King Street and a secondary school in the distance.
Inverness Police have recently issued a general warning to drivers telling them to conform to the One Way system.

I believe the offenders are mainly drivers coming from the Greig Street Bridge direction
and turning left against the No Entry sign into King Street. But why is this?

On 16 September there were changes to the City's one-way system in connection with work
on the River Ness Flood Alleviation Scheme. In particular Greig Street became one-way from
the Greig Street Bridge to this junction with King Street. 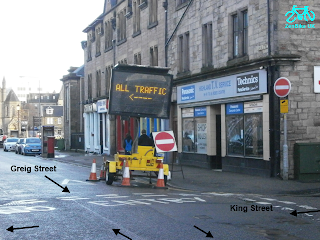 A mobile information display has been parked at the junction.
Drivers approaching the junction from the two-way section of
Greig Street would appear to have no excuse for turning right
into King Street. 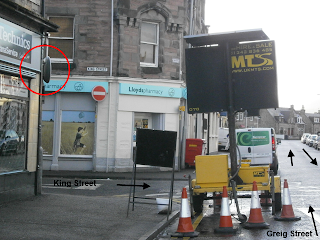 But here is the view from the other side,

There is no sign, apart from road markings, to tell a driver that
they are leaving the one-way section of Greig Street and entering
the two-way section.

Approaching the junction, the angle of the No Entry signs means
that only the furthest away sign is readable.
It is possible that some drivers do not notice the sign because of the distraction of the mobile display and associated traffic cones. 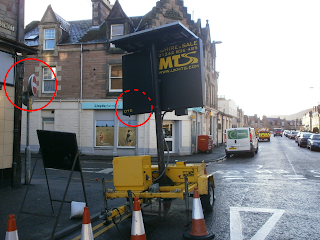 Nearer to the junction the first No Entry sign disappears behind the mobile display.
The second No Entry sign starts to be readable by is no longer in the driver's direct field of view.

Before blaming drivers or taking up Police time, it might be worth reviewing the traffic signs.

At the very least, a No Left Turn sign might be appropriate here.
Posted by Zen Biker Maniac at 00:32 No comments: