National Cycle Routes 1 and 7 coincide for the final approach into Inverness from the South.There is a choice of two ways from Kingsmills Hotel to Eastgate Shopping Centre.
The more direct choice follows the whole length of Kingsmills Road ending at the Crown Church.

At the Crown Church junction Charles Street goes to the left and Midmills Road to the right.
The Cycle Route continues forward across this junction. Now the tricky bit. 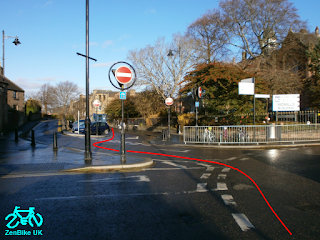 A cyclist approaching the juction is confronted by two sets of No Entry signs. The first is where Ardconnel Terrace meets the junction. The second is where Stephen's Street meets Ardconnel Terrace.
The red line on the photo shows the desired route into the city centre.

From a distance it appears impossible to continue cycling beyond the junction.
Police Officers and Traffic Wardens would take the view that it very clearly says No Entry. 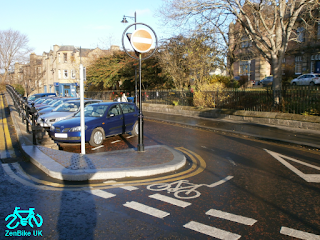 But, looking more closely, there is a cycle lane marked on the road at both No Entry junctions.
Going North towards town, these lanes are on the left with a painted bicycle marking. Clearly, the Highland Council intends cyclists to be exempt from the No Entry signs. Even some cyclist may think that they are breaking the law (but continue anyway).
The situation is further complicated by parking bays where the cycle lane should be. 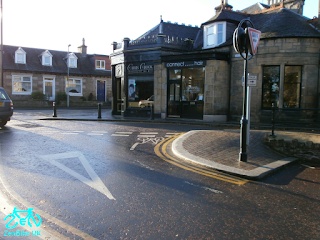 Motorists (and cyclists) travelling South towards these junctions have even less information.
They see One Way arrows and the final Give Way signs at the junctions.
They are given no warning that they may meet bicycles coming in the opposite direction.


In spite of all this, the current traffic movement is mostly without problem.
There are occasions when motorists take issue with oncoming cyclists but these are rare.
Motorists, mobility scooters, cyclists and pedestrians generally respect each other.

Two proposed improvements:
* Modify the One Way arrow signs to additionally show a contraflow cycle lane.
* Change the geometry of the juctions so that Stephen's Street becomes the main route.
(Ardconnel Terrace has comparatively little traffic and would join onto Stephen's Street.)

The second half of Stephen's Street is steeply downhill to Eastgate in the city centre.
Locally it is known as Stephen's Brae although there are no street signs to show this.
The top half is open for two-way traffic - the bottom half is pedestrianised with small cafes. 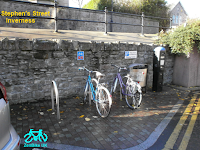 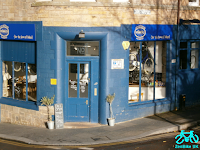